Anyone watching CBS's "The Defenders"? 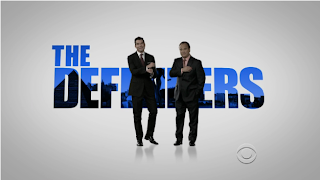 As my wife will attest, the *new* show I was most looking forward to was CBS's "The Defenders." I'm hard pressed to give definitive reasons why this particular show sparked my interest. Jim Belushi is not a favorite actor of mine. He's okay, in a normal guy sort of way. I've seen the movie "Underdog" numerous times and grew to like him. At the same time, I always considered his recent sitcom, According to Jim, one of the reasons why sitcoms had sunk so low. Jerry O'Connell also is rarely on my radar. Nothing against him, but nothing really in favor of him either. To be honest, when I saw the casting, I was kind of like "Who put those two together?" And "Who greenlit this one?"

I had those thought up until I saw the preview. These guys have chemistry! Someone knew something I didn't. Guess that's why I don't work for a network. Belushi plays Nick Morelli, an attorney in Vegas. He's separated from his wife who looks after their young son (about ten years old I think). His partner, Pete Kaczmarek, is the young stud to Nick's blue collar workman. Pete's into fast cars, great clothes, and hot women, particularly stewardesses and the assistant DA, Meredith.

Even now, I know what you're thinking: yet another lawyer show in Vegas where the underdog defense attorneys fight the good fight against the big, bad DA. Yes, there is some of that. But, in the tradition of Matlock and Perry Mason and Alan Shore and Denny Crane, these guys know how to win. And, unlike those other famous television lawyers, Nick and Pete care about their clients as people, not just a paycheck.

I knew going in that there was going to be some fast talk, lots of references to gambling as metaphor, and general pretty-people-doing-pretty-things vibe. That stuff is in there and it needs to be to stay on the network. Also, I knew that Nick and Pete would be the heart in an otherwise heartless City of Sin. I mean, they are defense attorneys, not bigwig corporate lawyers. What surprised me the most is Belushi. More to the point, it is the brain of Belushi's Nick that has been a happy surprise.

Frankly, I thought Nick would use a lot of fancy courtroom tricks as the main method of winning his cases. There's a great one in the pilot (and previews) where he proves to the audience how a man would have been shot in the back as a defensive maneuver. It was Nick's thought process that was good, giving Belushi the gravitas to prove that he ain't just a jovial guy not to be taken lightly. He can be thoughtful and, most importantly, have that appearance of intelligence be true to the character.

O'Connell's Pete is a slick lawyer, one that would find a home on just about any courtroom drama. If I had to pick another show (that I've watched; never watched Law and Order) where he would fit, it would have been Ally McBeal with Boston Legal a close second. He's young, ambitious, and keen to have a good payout. And he has, so far, been on the receiving end of Nick's instructions. The best way, according to Nick, to determine if a driver could have seen a jogger (that the driver killed) is for Pete to run, in his fancy shoes, along the street while Nick drives behind him. To date, Pete's been the more comic relief character. I expect that to change.

Halfway through the pilot episode, I emailed a friend and suggested that The Defenders might fill the gap left by Boston Legal. In the two episodes aired so far, The Defenders went from "Let me check this new show out" to "I will take no calls during the 9pm hour on Wednesdays."

Here's the link to the CBS website where you can watch the first two episodes now (and probably all the others later on).

Does anyone else watch this show?
Posted by Scott D. Parker at 1:00 AM

Email ThisBlogThis!Share to TwitterShare to FacebookShare to Pinterest
Labels: Television

I watched the first two episodes and enjoyed them. It's a pretty clever show.

It's a great show. Clever, witty and acted with real conviction and life.