Don't listen to Jay Stringer. He says "writers' block" is bunk. (I'm going with plural possessive on that one, as I think if it exists, it exists for more than just me.)

Jay's point was more complicated and nuanced, of course, but I don't have time for that.

As writers, we get stuck. We end up headed down some path running too fast to trip over roots, then the phone rings and we have to stop. Or we get stuck. Or it rains for four days non-stop and floods your basement because the damned vapor wrap behind the siding is goofy and you suddenly have new priorities. Or you took one too many glasses of "writing lubricant" and end up typing in some odd version of Esperanto.

So you're stuck. Blocked. Whatevs.

Debut author Hilary Davidson (THE DAMAGE DONE) said she's been known to get to that spot and write something along the lines of "Chapter Seventeen: Dan gets home to find that Roger has broken in and stolen Francine's locket, which he then tries to sell to Becky." (BONUS: Listen HERE to Hilary being smart and me being a dork -- an mp3 snippet from our upcoming DSD podcast interview thing.)

So there's one way to break the writers's block. And I've heard some others. So let's share. Oh, crap. Number these things to make the reading easier. OK. Hang on.

Write explanation for placeholder chapter here and then go on to the next idea.

Yeah, I probably should have saved this for the fifth one, because, seriously, where do you go from there? But that's what I've tried to do. If you get stuck, get rid of something. Add some conflict. Honestly, until your novel is finished, it completely sucks. When it's done, maybe it sucks less. But while you're writing it, don't be afraid to mess some stuff up. I mean, I'm not saying I know what the heck I'm doing. I'm just numbering some ideas to make it sound like I have something worth paying attention to. If you're stuck somewhere, toss in a hand grenade. What have you got to lose? If you had something to lose, you wouldn't be stuck.

3.  Never end your writing session at the end of a chapter/paragraph/sentence.

I stole this from somewhere and I'd link you back there, but I forgot who suggested this. The idea was to stop writing in the middle of a sentence. That way when you pick up the next day, you're just moving along in the middle of things and less likely to get stuck. I can't do that. I wouldn't be able to sleep if I didn't wrap things up.

If you get stuck 20,000 words in or 50,000 or wherever, then maybe you need to print out some pages and read. Maybe you find something printed out that you can use. Foreshadowing. A clue you'd dropped and then forgot about. Reading and re-reading not only kills your soul, it also means you miss stuff. It's kinda like having the same person write a story and proof it.  You made the mistake once, so you're likely to gloss over it again. Having another set of eyes helps. Having another way to interface with your writing is pretty good, too.

5. Aw, crackers. I promised you five.

OK. Maybe you can come up with a fifth trick to break writers' block. Maybe I'll think of one later. So help me think of some ways. And while you're doing that, check out the cover that John Hornor Jacobs did for the DSD collection: TERMINAL DAMAGE -- which will be available laster this month. Seriously, you need a cover? Send cash to Mr. Jacobs. 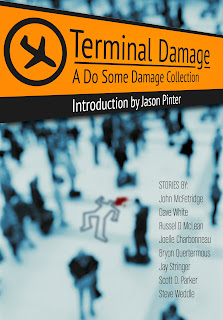 Awesome cover. Really liked the Needle covers and layout so it's no real surprise that this one is a winner also.

Great cover. And the stories are good, too (if I do say so myself).

Timely post, too. I've been blocked for over a year but afraid to admit it.

I'm going to try all four of thee and if I come up with a fifth, I'll let you know.