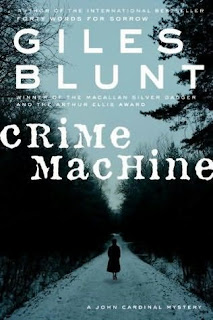 Seems it's book review week here at Do Some Damage (or maybe I'm just too lazy to come up with an original post) so I'm going to link to a review of fellow Canadian, Giles Blunt's new novel Crime Machine that I wrote for the National Post newspaper here.

They headlined the review, "More Than a Whodunnit," which ordinarily would annoy me as it sounds like a negative comment about genre fiction, but I used the phrase myself in the review. Here's what I said:

Blunt’s last John Cardinal novel, By the Time You Read This, opened with the death of Cardinal’s wife, so it isn’t a spoiler to say that in this fourth novel in the series he’s still dealing with grief. In fact, the new novel is an exploration of people’s need for human connection and family — from Cardinal and Delorme, to the young woman and the married man having an affair in the opening scene, to the American reporter in town with her own theories about the murders, to an elderly man being held hostage, even the members of a Charles Manson-like family, the crime machine of the title.

Without that unifying theme, Crime Machine could have become lost in its myriad subplots and red herrings. But this is more than a whodunnit.

And I'm sticking by it. It is more than a whodunnit (not that there's anything wrong with just a whodunnit).

This is the fourth novel in this series and while it's probably a good idea to start with the first one I think it's fine to start with this one. This is a terrific book.
Posted by John McFetridge at 12:56 AM