These are the days, Mr Bacon

As the Philip Glass song goes, "These are the days, my friend."

The folks at Tyrus know it:

We all know it.

Sure, if you're a writer, Janet Evanovich has probably taken all your money, but who cares?

You remember a million years ago when James Joyce would publish his books out of Shakespeare and Company? Now that was an indie press. Small press runs. Word of mouth. Buy some whiskey for a writer and you're hanging out all night? The more things change...

So the publishing world is collapsing. Alright. TV is still killing radio. The internet has shut down all newspapers. According to Wired magazine's website, the web is dead. Er, yeah.

Here's where we are now. Writers can interact more directly with the readers. Good for some, crap for others. Don't want to interact with your readers? Fine. Stay off twitter. Move to the woods, grow old writing letters to teenage girls and drinking your own pee. Fine.

I'd wager the "publishing world" or "writing world" or whathaveya is much more open today. If I want to contact a writer I admire, I search online and within 10 seconds I'm emailing the author. (Sorry, Richard Powers. And yes, I understand what your attorney said. Though, you know, seriously, if I could just explain how you and I think exactly alike, you know, like how I totally get what you're trying to do, you know, then I think you'd understand.)

So on Saturday night, the folks at Tyrus start spreading the word about Bill Cameron. The next day Bill posts pix of himself eating pig. Honestly, can you imagine Hemingway tweeting from a fishing spot? I'm sure there's been a goofy Hemingway tweet meme already, but that's kinda the point, ain't it? This community of readers and writers. Not just the book readings in which you go to a bookstore, sit down for a bit and listen, then get a book signed and leave. No, you can interact with some of your favorites. I dunno, I just think that's pretty cool.

And you can get things done over the internet, the sort of thing you never could have accomplished 10 years ago.

The summer issue of NEEDLE just came out and you find out right away how people enjoy your story. Sites such as DBK have even started looking at short stories only. Can you imagine a magazine coming out that reviews short stories? Me neither. The lead-time would be a killer. Online works, though.


And Mike Sheeter was just featured over at Jedidiah Ayres's web site. And, in addition to having a fantastic novella in the first issue of Needle, Ayres has a stellar piece in PWG. And PWG is run by Neil Smith, who had some great work published by Bleak House Books, whose brains went on to form Tyrus Books, the folks who said how cool these days are. 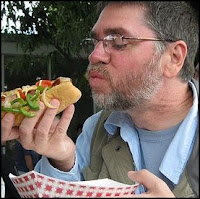 Five degrees of Kevin Bacon, nothing. Oh, and speaking of Bacon, that's exactly what started this whole thing off in the first place. Tyrus Books asking what Bill Cameron had stuffed his face with. And readers responded. Because that's what readers do. They read. They respond. But these are great days, my friend. Because writers are responding, too.


Tell ya what, share an online connection about how cool these days are and I'll draw names and send someone a copy of NEEDLE's summer issue. Deal?
Posted by Steve Weddle at 3:00 AM

The days are indeed awesome.

I've gotten work because of Twitter. Work I wouldn't have gotten otherwise.

That's enough for me to see how awesome the potential: the connections are there, you merely need to throw the pebble, see who it hits.

These days rock...I've met booksellers because of twitter who will actually stock my book because the *know* me. I've met my agent's other clients out in twitterverse, which allows me to feel connected to what is going on in the biz and I've met some friends that I can't wait to someday sit down with in person and talk for hours about everything.

These days are so cool, I've sent fan e-mails to authors within minutes of finishing a great book, they'd write me back and we've developed cyber friendships which turned into real friendships in the sense we meet for lunch/dinner, talk on the phone and send each other cards. (No restraining orders yet--knock on wood.)

I also liked this one time I wrote to a writer asking her what the ending of her book meant because it was vague and open-ended. She wrote me right back. If this had been 20 years ago, I'd still be walking around confused and cursing the ending.

If it weren't for online connections I've made through blogging, Twitter or Facebook, I don't think I'd have a career. At least it would look very different.

I certainly wouldn't have made friends with other writers and gotten to know some incredibly cool people.

These days are swell because a book dork like me can actually provide a forum for some of his favorite writer without spending a fortune to do it.

Also, it's aloud my fiction to find not only a home, but people who actually want to read it.

Yeah, too cool to be able to email an author and get a response back.

Crime fiction is a helluva community.

And congrats to PopCultureNerd. NEEDLE is on its way to you.