So, no questions about The Bridge? Well, according to the ratings, no one watched it. Saturday night at 8:00, I’m glad people weren’t home watching TV.

But I’m behind on assignments and didn’t manage a blog post for this week, so I’m going to post this review I did last year for The Toronto Star of the book, McMafia by Misha Glenny:

The next time someone tells you they believe in open markets, deregulation and globalization, tell them to read Misha Glenny’s McMafia, an account of the author’s travels though organized crime syndicates in every corner of the world.

Organized crime has been around forever, of course, but Glenny makes an effective case for its becoming a global force when two things happened; the fall of communism and the deregulation of international financial markets. 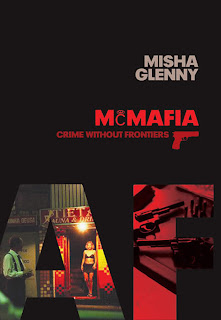 Communism may have been the perfect breeding ground for organized crime – and Glenny does a good job of detailing the corruption of secret police forces and government officials – it’s the deregulation and globalization of markets that really accelerated the crime rates.

Most countries in the former Soviet bloc were prepared for the fall of the Berlin Wall before the west saw it coming. In Bulgaria, for example, the Communist Party passed Decree 56 which overnight allowed for the creation of private enterprises, known as joint-stock companies. “Many in the party, still hard-liners, were shocked by this development, as it looked like the thin edge of a capitalist wedge. But the state security services, which habitually subordinated ideology to the love of power, took it in their stride.”

In this period of tremendous upheaval and uncertainty, with outbreaks of nationalist violence throughout the region, the west imposed economic sanctions which in the Balkans left the states bankrupt, the secret police, police, military (Yugoslavia had the 4th largest in the world), virtually all state employees unemployed and the people dependent on black market goods to survive which Glenny shows with personal stories of filling his car with black-market gas and buying smuggled cigarettes. Every state in the region, fearing for its very life in the era of ‘ethnic cleansing’ smuggled in weapons and the smugglers, with no real political ideals, became rich and powerful.

From here the author travels the world showing how organized crime syndicates followed similar routes to power and wealth.

There is a depressingly similar tone to each of the stories, repeated on every continent in the world, as government mismanagement, official hypocrisy and greed eventually win out over everything else. And Canada is not immune, of course.

In the chapter, “Buddies,” Glenny visits the enormous dope growing industry in BC and again makes the connection between a government policy decision and the opening of a door for organized crime. When the Americans imposed a 27% tariff on softwood lumber it pretty much wiped out the Canadian industry. Glenny claims that, “Many of those who once worked in the traditional industries have moved into marijuana,” and he may well be right, though I’ve heard different versions involving more seasoned criminals driving the industry. The bigger problem seems to be the world isn’t quite mature enough to accept that some people have a glass of wine or beer and some people smoke a joint. With such huge demand, someone’s going to supply. What prohibition did for gangsters in thirties, the war on drugs is doing for organized criminals now.

He understands Canada well and how the resentment towards the US and yet the almost total interdependence and he mentions DEA agents working quite freely in Canada, but there’s no mention of Marc Emery, Canada’s Prince of Pot, arrested in Nova Scotia and facing deportation to the US, though no charges have been laid in Canada where his business was run legally.

Glenny points out how, “Cannabis is influencing attitudes in Washington towards Canada,” by pointing out the US government’s outrage when Canada entertained the idea of decriminalizing the possession of less than fifteen grams of weed. No one seems concerned with what a huge boon this would be to organized crime as the supply of the dope would still be handled by criminals – giving them an enormous amount of capital to use for other criminal activities. The UN estimates that 70% of the income generated by organized crime comes from drugs – cannabis is by far the most popular illegal drug in the world.

A common theme in the book is how American (or western) policy changes (such as the softwood lumber tariff in Canada, deregulated financial markets or economic sanctions in the Balkans) lead to an easy justification of criminal activity – they increased our poverty, so we’ll steal from them.

The book ends in China, where at least 25% of the goods shipped out are counterfeit and many of these actually made in Korea. Asked if they care about this, a Chinese official tells Glenny, “Two hundred years ago people from England came to Shanghai. They were not your fabled English Gentlemen, they were pirates. Just as the British pirates came and raped our shores, so there may be pirates out there with the Chinese traders of the present day. But when the market reaches a certain scale, the worst practices will fall away and something that demands regulation and an adequate regulatory mechanism will emerge.”

Glenny does a great job of showing how the human costs of crime are always close to the surface – there are victims everywhere. This is not some glamorous Hollywood view of organized crime. It’s dirty, mean and vicious. It leaves nothing but crushed souls in its wake.
Posted by John McFetridge at 12:10 AM

You caught me. I was driving back from my parents' home in Pennsylvania when it was on, but I did DVR both hours. We'll be caught up before this week's episode.

And I'll have questions then.