The Cold Kiss: The book that almost wasn't

This week marks the release of THE COLD KISS, a fantastic book from John Rector. He stopped by DSD HQ to talk about it. 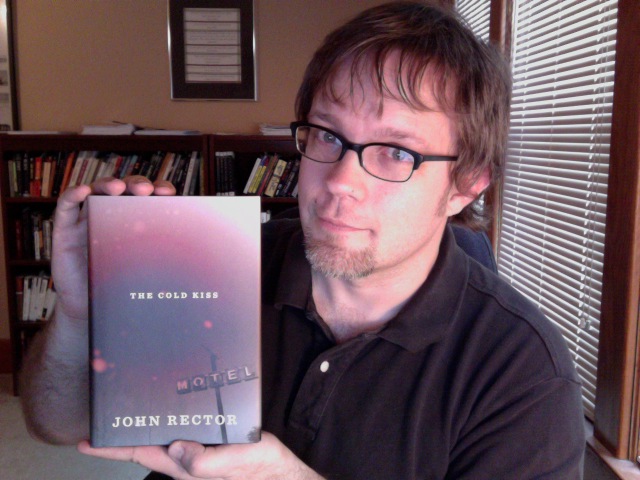 This week, on July 6, The Cold Kiss will officially be released in the US and Canada.

For those of you who haven’t experienced it, seeing your first published novel on the shelves of your local bookstore is a surreal and wonderful experience. The stars have aligned in your favor, and the result is right in front of you. When it comes to the writing life, it’s the best feeling you can have. But in my case, that feeling comes with a long sigh of relief.

You see, I almost didn’t write the book.

Seventy pages into The Cold Kiss, I turned my back on it. I didn’t like the setting, too claustrophobic, the characters too dark, and the ending I had in mind seemed far too grim and depressing. I’d just spent several months being beaten up by NY publishers over the first book I’d written, The Grove, and I thought if I came at them with another dark, dread-filled novel, they’d send me packing yet again. So, I closed the file on The Cold Kiss, saved it in a dingy corner of my hard drive, and moved on.

If it hadn’t been for my wife reading a printed version of those first seventy pages and telling me she wanted to know the rest of the story, The Cold Kiss never would’ve seen the light of day.

As it turned out, she liked the claustrophobic setting and those dark, forgotten characters lost in all that snow. She convinced me to give it another try, so I picked it up again, and it didn’t take long to realize she was right.

There was something there.

I went back to work and finished the first draft of The Cold Kiss in sixteen weeks. Along the way, a new and much better ending presented itself, and for the first time I saw how all the pieces of the book would fall into place. That moment when everything comes together and you see your novel, complete and whole, for the very first time has always been my favorite part of being a writer.

At least until this week.

All Nate and Sara want is a new life in a new town, away from the crime and poverty of their past. So, after being approached at a roadside diner by a man offering $500 for a ride to Omaha, they wonder if their luck might be changing.

At first it seems like easy money, but within a few hours the man is dead.

Now, forced off the road by a blizzard and trapped in a run-down motel on the side of a deserted highway, Nate and Sara begin to uncover the man's secrets. Who he was, how he died, and most importantly, why he was carrying two million dollars in his suitcase.

Before they know it, Nate and Sara are fighting for their lives, and in the end, each has to decide just how far they are willing to go to survive.

The Cold Kiss is an everyman psychological thriller that pits a young couple against moral corruption, greed, betrayal, and love. More simply, for two characters who may have used up all their chances, it's the classic final trip down the dark tunnel that might lead to heaven, but drags them through hell. This is A Simple Plan meets The Getaway, with a pulse-pounding plot and a twist ending. John Rector is name that all thriller fans will come to know and love for years to come.

For a solid review of THE COLD KISS, check out what Spinetingler thought here.

Order THE COLD KISS right here from the B&N people.

Welcome. Can't wait to get my copy. And I second that comment about supportive spouses. I'd be screwed without mine.

It's a hell of a novel, John. Thepacing is razor sharp and even better than the Grove (there's got to be one or two editors kicking themselves over that one) Congrats and here's hoping it sells huge!

Looks and sounds really good! Bigtime congrats, my man. Cherish the day... or really just go out and treat yourself to a damn good meal!

I couldn't & wouldn't put it down..reading in one setting. The Cold Kiss is a terrific read comparable to other fine novels, such as "No Country for Old Men" and "A Simple Plan". Kudo's John

Dont know why my previous comment was accredited to anonymous...so I thought I'd try again. The Cold Kiss is a hellava ride & worthy of film for sure.