Pulp It Up with Sergeant Zero

By Steve Weddle
Anthony Schiavino is a busy guy--Sergeant Zero, PulpTone and so much more. His Sergeant Zero is a pulp hunk of comic goodness fresh out of the gate -- and has received huge praise.
For a solid taste of what this is all about, you'll want to check out TRENCHES IN HELL, a complete five-page story.
We flew Anthony down to the DoSomeDamage HQ last week and spent a few days by the pool talking about what's going on with pulp, noir, comics, and the iPad.
SW: Why comics? Wouldn’t it be easier to just write fiction?
AS: One would think, and that’s how it’s originally started, but I come from a visual field. I’m a graphic designer by trade with a love of comics. The book store is like my second home but comics are where my roots are, so to speak, in terms of a hobby.
So when I sat down to write this thing I just thought I could do more with it. When I write I think in visual terms. The story is flowing through my thoughts like a movie and I’ve got the whole thing choreographed right down to the reporter taking a drag of his cigarette in dramatic pause.
But that doesn’t mean I don’t want a book series out of this thing.
SW: What/Who is Sergeant Zero? How did you get started with this?
AS: Sergeant Zero is a patriotic pulp hero during World War II. He’s not a super hero although he does some things beyond the realm of thinking. Zero is more like a heightened athlete. His origin is more like Mary Shelly’s Frankenstein than radioactive rays. But the comic takes place between time periods.
On one hand we’ve got the weird war tales and what people have told me is a "Band of Brothers" meets "Inglorious Bastereds" type situation.
On the other we’ve got the early 1950s. This guy Joe Sinclair is living downtown in the Lower East End. He’s a vet with Post Traumatic Stress Disorder. It’s his life and how he deals with living in a shit hole and the people therein. He’s having all these flashes he thinks is just the PTD but it could be more.
How I got started? I’ve been in comics for I can’t even tell you how long. I’m considered a vet at this point doing design work and lettering. But I’ve always wanted to write something. I’m an avid collector and have been for years but, like anyone else, there’s always been that story I’ve wanted to tell that just wasn’t on the racks.
That’s not a slight to any book or anyone. But when I walk in the store there are times I leave without buying anything. I’ve got that feeling pulling at the back of my subconscious that something is missing.
For me, right now, that’s what Sergeant Zero is. Everyone thinks it’s all WWII because that’s what the first issue is. That maybe they wouldn’t like it because they’re not into war movies or the time period. But going further I can tell you there’s much more. I’m 23 issues -- or parts or whatever you want to call them -- in. Most people pitch a four-part story. I’m pitching a story.
But maybe it’s meant to be something else. Maybe it works better as something that isn’t a comic. Perhaps a comic but maybe a movie or serialized show on the net like what Crackle.com did with Angel of Death. This is one of those stories where you see SERGEANT ZERO WANTS YOU! poster littering the backgrounds. He’s on the news reels, in the papers...everywhere.
SW: Your Sergeant Zero comic has a pretty solid “noir” feel with a good dose of “pulp.” What sort of tone are you trying to set with the stories?
AS: It’s all I said and if you throw in some secret agent aspects, some more dark pulp heroics, a little bit of Kung-Fu, and yes space action...you’ve got the general mix of what this comic is.
This has something for everyone. But it all boils down to going back to the days of classic black and white Hollywood. Those Humphrey Bogart movies with Lauren Bacall are a huge influence on me and how I write.
So, yes folks, there is even a little bit of romance in this thing.
The tone differs depending on what the story is. I mean we go from dyed-in-the-wool classic Hollywood romance to gorillas with machine guns racing through the African desert to bar room brawls. That’s the lighter fare.
SW: Your site PulpTone.com has grown into something huge over the past few months. Uh, what’s that about?
AS: It’s all about marketing. It differs for everyone really but Pulp Tone is a good mix of everything I love about life. It was originally my personal site to post work on a blog much like what everyone else is doing. Then I started doing some reviews and people seemed to like them. So I put the word out for reviewers and it’s grown into what it is today. 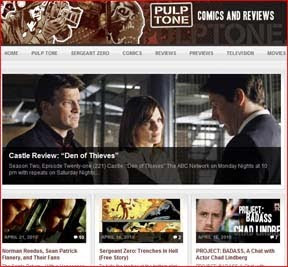 Nice interview, Wed, as per usual.

I needed a new place to go on the Internets. Did not know about Anthony's pulptone.com or his comics work--both very cool.

Great interview. And I'm glad that someone else thinks that paper books and comics will continue even with the coming of the iPad:) I wasn't familiar with Pulptone and will pop over there next!

BTW...really interesting stuff on the comic book process. I always wondered how it went from story to the page. Thanks for the info!!

Thanks Lein and Joelle! I've been working in my own little corner of the internet but I'm not well known. So it's fantastic when I can do interviews and chats like this to reach new people in every sense of the word.

If you click on the Sergeant Zero category on the top of Pulp Tone you can see all of the posts. Dig far enough back and you'll see pencils, inks, colors, etc. as we went along.

And paper is going to be around for a good long time. The digital versions are only going to get more people reading and hopefully into book and comic stores eager for more. So many thought it was going to be the final nail in the coffin. It's the opposite. It's only going to grow the audience.

Thanks again! Stop by and say hello! We're on Facebook too!

great interview. Always good to see some comic book chat, and pulptone is becoming one of my first destinations on the net.

Glad you folks dug the interview.
And thanks to Mr. Tone for stopping by.

Cool interview, Steve. It's nice to get to know the talented Mr. Schiavino a little better and learn more about Sergeant Zero and Pulp Tone. Wishing Anthony much continued success!

Thanks Jay. I'm glad people are starting to make daily visits to the site. It's really humbling.

Thanks Paul! I try to keep it entertaining.

Steve...I'll stop by any time you'll have me. It was a blast.

Thanks Kathleen! Between sites like Do Some Damage, Facebook, and Twitter I've met so many new great people. Like I said it's very humbling. I can only hope people enjoy what I've created. There's much more to come if it's meant to happen.

A Different Kind of Writing Block

by Scott D. Parker How often do you restart a novel you’ve set aside? I am an obsessive saver of things when it comes to my writing. I’ve go...