Book Review: The Case of the Velvet Claws by Erle Stanley Gardner 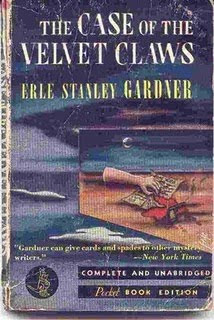 (When inspiration doesn't strike, it's time to recycle older posts. This is one from my own blog written before many of you knew who I was. Enjoy.)

Perry Mason. Bet you instantly thought of Raymond Burr, the actor who played Mason on CBS from 1955-66, right? Who didn’t? I did as I read The Case of the Velvet Claws, the first Perry Mason novel, published in 1933. I’ve been wanting to read some Perry Mason novels (there are 80) for awhile but I didn’t want to start just anywhere. Sure, I’ve been told by more than one source that there is no chronological order to these books. Be that as it may, I am a purist when it comes to series. And, as a writer and creator of characters myself, I wanted to see how Erle Stanley Gardner started when he created the most famous lawyer in crime fiction.

Picturing Burr is not a bad place to start. You see, Mason in the novels is hardly described at all. His secretary, Della Street, gets more words of description (“slim of figure, steady of eye”) than does Perry Mason. The one feature of Mason’s physical appearance that Gardner describes more than once are his eyes. In fact, it only takes six sentences from page one to get a description of Perry Mason’s eyes:

"Only the eyes changed expression. He [Mason] gave the impression of being a thinker and a fighter, a man who could work with infinite patience to jockey an adversary into just the right position, and then finish him with one terrific punch.”

Knowing what I do about the television shows—Mason never loses—it’s remarkable that there, in paragraph one of book one, the Mason template is laid out. Three pages later, Mason, himself, lays out his mission statement to his new client:

She (the client) looked up at him then. “Just what is it that you do, Mr. Mason?” she asked.

He snapped out two words at her. “I fight!”

Hard to argue with that line. And Mrs. Eva Griffin doesn’t. She’s in trouble and she hires Mason to help her get out of it. The previous evening, Mrs. Griffin was out with Harrison Burke, a man who was not her husband, a man running for office. When a hold-up occurs at the hotel where they were dancing and dining, the police arrive. One of the sergeants, a friend of Burke, recognizes him and knows that the newspaper reporters will have a field day with the news of Burke and a married woman. That officer allows them to stay away from the reporters and then smuggles them out the back. Everything’s good to go except Frank Locke, the editor of Spicy Bits, a gossip rag, finds out and threatens to publish the information.

Now, Mrs. Griffin is asking Perry Mason to help her. His first response: have Burke pay Locke off. That surprised me a little, knowing what I know about the TV version and Mason's stone cold integrity. And with Mason’s fixation on money, he not unlike Bertha Cool, Gardner’s other famous creation. But Mrs. Griffin refuses because she wants to keep Burke’s name out of the papers. She lays down some cash on Mason’s table and gives her new lawyer one tidbit of information: Locke has a secret he’s trying to keep hidden. Mason rushes off to expose the secret and use it as leverage against Locke. The trail leads to one George Belter, owner of Spicy Bits. And his wife is there, none other than Mason’s client, Mrs. Eva Belter.

From this point, the book races along but not before George Belter’s shot dead, and Eva Belter tells the police that she heard Perry Mason’s voice in her husband’s bedroom seconds before the gunshot. Now, Mason must clear his own name while simultaneously looking out for the interests of his client. You think he can do it? Seriously, do you?

I am not an avid watcher of the TV show so I can’t say how Burr-as-Mason goes about doing his job. And I’ve only read book #1 so, if Mason changed his tactics throughout the novels, I can’t know about it either. I will say this: Mason is quite hand-on in this case. In fact, the most surprising thing he does is sock a guy to the ground. Didn’t see that kind of action coming, but loved it. Another interesting aspect of this case was how soon Mason had an idea as to the truth of the entire plot. But he needed proof. And he went about getting the proof in ways I also didn’t see coming. He set up on of the characters, not knowing, for sure, if his set-up would work. For example, he went to a pawn shop owner and paid the man $50 to verify that whomever Mason came back with was, in fact, the purchaser of the gun used in the crime. Now, as a reader, I got to wondering: who will Mason bring back? Later, Mason goes to another character and all but blackmails that character into saying something that needed to be said in front of a third party. Brilliant tactics but not entirely on the up-and-up.

The language of the book is obviously dated in places. Gardner loves his adverbs and uses some of them over and over again, including the word “meaningly.” In an effort not to type (or dictate as Gardner did) the word “car” or “automobile” constantly, Gardner interchanges the word “machine.” It’s a bit odd to read a car described that way. And, like William Colt MacDonald in Mascarada Pass, Gardner spells out, phonetically, drunken speech, employing words like “fixsh,” “shtayed,” and “coursh.” Humorous and easy to understand but, again, things we modern writers could never get away with.

And speaking of things you can’t get away with, there’s Gardner’s choice of the word “girl” to describe Della Street. She’s 27 and, while we never get the age of Perry Mason, he can’t be that much older than she. But, nonetheless, Gardner has “the girl” get a file or “the girl” answer the phone or “the girl” take down dictation. The biggest shock of the story—and I don’t this is giving anything away; apologies if it’s so—was when Della and Perry kissed. It didn’t seem romantic and I didn’t get the impression that there was something more. But it was there. You never saw that in the TV show. Just one more reason to read these books, especially the early ones, to see how Perry Mason was originally portrayed.

There’s a quote about Erle Stanley Gardner on the back cover of the Hard Case Crime edition of Top of the Heap, a Cool and Lam story that, I think, sums up Gardner’s technique of crafting a story: "Among his many other virtues, Erle Stanley Gardner is surely the finest constructor of hyper-intricate puzzles in evidence..." The Case of the Velvet Claws is certainly intricate, a well-crafted tale. Heck, half the fun was re-reading chapter 1 when everything was set up, now that I knew the ending. But, like a good mystery author, all the clues were there. When Mason delivers his summation, you want to smack yourself on the forehead. (His summation, by the way, was not in a courtroom, something I, of course, kept waiting for. Not in this book. Perhaps Book #2.) As hard-boiled as the book is, this is the coziest mystery book I’ve read, perhaps ever. I thoroughly enjoyed this book and look forward to many more Perry Mason mysteries.

Historical Note: the edition I have is the 16th printing from Pocket Book, June 1944. What makes this edition unique is the wartime nature of the presentation. On the back cover, in a small black square, are the words “Share this book with someone in uniform.” At the end of the book, after the story and biographical information, is a page imploring the reader to buy war savings stamps and certificates. Lastly, there is a list of books published by Pocket Books, seven pages long, complete with asterisks noting which titles fall under 8 oz. and, thus, can be sent overseas without any written authorization. These seven pages are peppered with testimonials by servicemen from around the globe. The most telling feature of the introduction is about the POWs. Those Americans imprisoned by Germany can receive books via a Prisoner-of-War Service established by Pocket Books. Interestingly, the Americans captured by Japan were not allowed to be sent books. It’s a fascinating snapshot of a country at war and how even the simplest of entertainments—a mystery book—cannot escape the all-consuming nature of a world at war and the call to do one’s part.
Posted by Scott D. Parker at 1:00 AM

Excellent review of CLAWS, Gardner, and his work. I'm a recent convert to his writing and have a couple Mason novels on the TBR behemoth.

I envy you your journey through the Mason novels. I've read and enjoyed them all. Mason's relationship with Della was usually kept under wraps, although I remember that he did propose at least once.

Gardner was typical of many of the popular mystery writers of the time (George Harmon Coxe, Aaron Marc Stein, Baynard Kendrick, Hugh Pentecost, etc.): always entertaining, always satisfying. More of these books should be made available to a new generation of readers.