Getting to Know You

When my Entertainment Weekly magazine arrived this week hailing The Good Wife as the best show on TV, I thought, “Ha, I was right,” (hey, I’m shocked, too) and then I wondered about the way TV shows now build an audience the way movies once did. 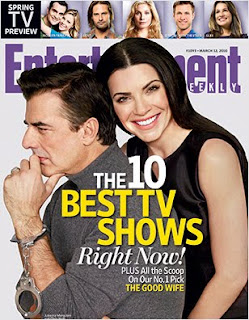 Nowadays sometimes a movie plays in a few theatres in New York and LA just before the end of the year if the producers are trying to get Academy Awards nominations. Once in a while an art film might get a limited release, or a documentary, but for the most part these days movies open wide, thousands of screens at once. They’ve usually been running ads for weeks so everyone knows about the movie long before it’s in theatres.

Opening weekend is everything and box office usually goes down every week after that.

I remember when there was a huge build up to the new TV season, when all the new shows – on all three networks – started the same week. Some we were looking forward to, some we were going to avoid, but we knew about all of them. The key for new show was to keep its opening night ratings through the whole season.

Now it seems like a show can start with low ratings and see them grow over a season.

It seems like movies and TV shows have switched positions on this.

Then yesterday I saw an article in Variety about crime novels being adapted into movies (or rather, not adapted) that said, “A powerful lit agent suggests that the very qualities that help make these novels so popular may work against them in film adaptations. Relatable everyman or woman characters appeal to readers but may not be considered sexy or mysterious enough to carry a film. The modern day equivalents of Agatha Christie whodunits and Dashiell Hammett detective stories tend to appear on the smallscreen these days.”

I’m not sure it’s so much, “Relatable everyman or everywoman characters,” as much as it is simply character-driven stories.

Then the article quoted Janet Evanovich about the trouble getting her Stephanie Plum series made into a movie, "It seems like a no brainer -- there have been all these shows about bounty hunters -- but my poor little project just has never gotten off the ground," and again I thought, yeah, TV show, not movie.

And her comment about the bounty hunter shows made me think of a recent blog by a Canadian TV writer, Denis McGrath, who said when pitching a TV show imagine it as a reality show. He says, “Desperate Housewives spawned the Real Housewives of... The O.C. gave us The Hills...” and he could have said, “Cop shows gave us Cops...”

So, what’s this got to do with writing crime fiction novels?

It seems to me that these days people are all talking about writing ‘stand-alones’ that are very plot-driven, they’re trying to write movies.

But for me, series is where it’s at – TV series and book series. Big complicated plots and lots of characters that take some time to develop. Not necessarily the same main character everytime, but a real developed universe.

A place where you can really get to know the characters.

Sometimes it seems like the series is the unwanted child of publishing. Everyone seems to be looking for the big score, the great hook, the single sentence that can sell the book.

But the steady sales of the series seems to be the foundation everything else stands on, the support that allows the stand-alone risks.

The best shows on TV are the long-arc, complicated, lots of character shows - shows tht take some time to develop.

So maybe it’s not a bad idea to try and create some characters you could imagine spending a few books with – maybe you’ll never get a movie deal, but you might get a TV deal and that might even be better.
Posted by John McFetridge at 12:07 AM

In fact, i think you've hit on the most natural form of a series. The expanded universe approach that you're taking, allowing basically the same supporting cast but different leads, feels more comfortable and adaptable than the standard series.

Many of my favourite crime novels are series books. At the same time i think a 'one character' series only has a handful of essential books in them before they should wrap up. But with your approach, that doesn't have to be a problem.

So instead of writing a story, think about writing characters who could be fleshed out in future stories? Or building a universe around these characters where other stories can develop?

What John's doing may be the way to keep any "series" from growing stale, or running out of reasonable ideas. Shifting the importance of characters from book to book will inevitably lead to entire story lines that engage the author as the career develops. Book Ten may not resemble Book One in any way--no shared characters, different style, different setting, you name it--yet can still be easily traced back to its roots.

I agree. And THE GOOD WIFE is excellent. Some of the best of the rest is on cable TV: Damages, Breaking Bad, Dexter, Mad Men--and all of these have a pivotal character(s) at the helm. Few movies can match the intensity found here.

Hey Patti mentioned a TV series that I've actually seen! : DAMAGES.
We've only had season one here in Poland but I thought it was brilliant.

I doubt that you could get something so intense in a film.

Certainly one of the pleasure of first discovering Elmore Leonard was when a cool character from a novel turned up later in another book.

I think this is the perfect way to do a series. As much as I like some of my favorite characters, I do get bored reading them all the time. I know the writers have to be getting bored writing them.