You already know who Victor Gischler is. You know how great GUN MONKEYS is. And you've read some stuff since then. Vampires. End of the world. The one with the baseball card.
GUN MONKEYS is the book that let me know how good crime fiction could be, so I'm a little anxious for whatever his next book is.
THE DEPUTY is out April 1. No fooling. From the great folks over at Tyrus Books.
So let me get out of the way, since you stopped by to see what Mr. Gischler has to say.
Steve Weddle: Your recent books, VAMPIRE A GO-GO and GO-GO GIRLS OF THE APOCALYPSE, marked a departure from your earlier crime fiction works. With THE DEPUTY, do you feel as if you’re returning home?
Victor Gischler: Actually, I grew up a huge science fiction/fantasy fan, so when Go-Go was published (although many don't consider it straight-forward science fiction which I understand) I really felt like THAT was coming home. But the fact is I wasn't nominated for a Hugo or a Nebula or a PKD Award ... but I WAS nominated for an Edgar and an Anthony so I feel like crime fiction is where I've been the most welcomed. Ha-ha. In the end, I feel like home is wherever I find the story I'm most excited about at the moment.
SW: In THE DEPUTY, a part-time deputy named Toby Sawyer has the job of keeping an eye on a corpse. Then the corpse disappears. No vampires involved? No go-go girls?
VG: Nope. All horrors and perversions are perpetuated by mere humans in this one.
SW: What made you want to write GUN MONKEYS? 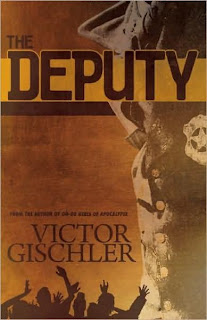 VG: Although I'd read crime and was beginning to read more, it was really films like PULP FICTION that clicked with me and showed me the possibilities for that kind of tone I wanted to set in my own storytelling. The novels of James Crumley enter the mix, too. With Gun Monkeys I think I was less writing a story and more depicting a landslide/avalanche series of events.
SW: When’s the last time you got through a week without someone asking about a GUN MONKEYS sequel?
VG: Actually it's been a while although it still happens now and then. The book is about 10 years old, but it's nice that people are still finding it. I've had many, many more requests for a Go-Go sequel.
SW: So this comic writing thing you do. How does that work? You write a short story and then paste a few sentences into boxes and people draw around them? You send in a short story of mostly dialog and an artist calls you up on the Skypes and you talk about imagery?
VG: Comic book writing is very close to screen writing. I feel like I'm part story-telling, part film director since I'm directing the visuals and movements of the character. I write a full sctipt with dialogue and what we should see in each panel on every page. Then the script goes to the editor. Once he okays it, he sends it off to the artists. The artist takes my bullshit and actually makes it look good. Thank God for talented artists.
SW: You’ve been writing DEADPOOL and PUNISHER comics for MARVEL recently. Was your move into the world of comics just another attempt to impress the chicks?
VG: I cannot ever remember impressing any chicks. If you know the secret to impressing them, please tell me! When I changed agents, I went with a guy named David Hale Smith. Not only did he dig my style of crime fiction, but he had good connections in the comic book world. I told him I wanted in on that stuff and -- it took a while -- but he hooked me up. Some mighty fine agenting.
SW: Best comic most people don’t know about?
VG: That's a tough one because comic readers know a lot about comics. And since I'm ready a lot of Marvel comics to keep up with my job, I don't have as much time as I'd like to ferret out some cool indy comics or to find those quirky obscure reads. Hell, rather that tell you about the best kept secrets, I hope somebody tells me. I'm always up for new stuff. Back in the day, there was a great funny comic called BADGER. Do they still make that?
SW: Some of us over at the Victor Gischler Fan Club meeting last Saturday were setting up wagers. The over/under for story ideas you had for Battlestar Galactica was four. I took the over. Good call?
VG: Zero ideas. The fact is the writers on that show kick so much ass they just don't need me. I got the entire run of the show on DVD and power-watched them straight through. Wanted to weep when it was over. Great stuff.
SW: THE DEPUTY was scheduled for last year with publisher Bleak House Books, then went to Tyrus Books along with Alison Janssen and Ben LeRoy. Tyrus Books is one of a handful of publishers doing great things with crime fiction. Do you think crime fiction, noir, whatever we call it, is becoming more mainstream or do you think the fans are just more vocal now?
VG: I have no idea and honestly no desire to keep track of such things. I know that I'm not a mainstream guy with mainstream tastes, so I simply don't keep much track of what's happening in the mainstream. But I do agree that there are publishers doing great things with crime fiction, and obviously I'm going to say Tyrus is one of those publishers.
SW: What’s your favorite room in your house? Why?
VG: The kitchen. For one thing, it's a pretty damn big kitchen for such a small house. Also, that's where the beer is and I do most of the cooking in my family. So the kitchen (and out by the grill) is where I spend a lot of time.
I've ordered my copy of THE DEPUTY. So now I wait.
Thanks to Victor Gischler for taking the time to answer some questions.

Coyote Crossing is a dusty little shithole town in western Oklahoma. A sleepy little pit stop for truckers, not a lot going on. So a dead body in the middle of the street at midnight is quite an event. The chief of police wants all hands on deck, so he calls Toby Sawyer to come babysit the body.
Toby doesn’t have a lot going for him. Twenty-five, a couple of years of junior college, married to a girl he got pregnant and living in a trailer on the edge of town. He’s working part time for the police department, hoping the budget comes through and they can put him on full time, so he can get health benefits. His wife is a waitress at a little crap diner near the railroad tracks. When he gets the call about the dead body, he pins his tin star to his Weezer t-shirt, slips into a pair of sweatpants and grabs his revolver.

It inspired me to do a little bit of digging on Victor’s work and I’ve just read the first few pages of Gun Monkeys, which is available on the Amazon page. Wow, I loved the style and this is definitely one more for my list – my poor old credit card!

Alan, Thanks. You'll love the book.

It's just going to get worse for your poor credit card, Alan, Pistol Poets is terific, too, and then....

Ah. great fun interview. My Name Is Earl and VG is on my list.