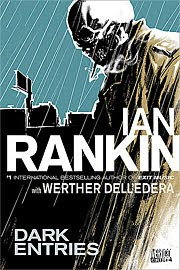 I've been reading comics (Zorro; Volume 2 of Neil Gaiman's Sandman series) and fantasy in recent days (the glorious and incomparable Perdido Street Station) so I made an interesting selection for my next crime story: combine the two. I picked up the first two volumes of the new Vertigo Crime imprint from DC Comics. These are interesting products: crime writers (Ian Rankin; Jason Starr) and comics writers who write crime stories (Brian Azzarello) teaming up with artists to create a hardback, single-story, illustrated book. I went with Ian Rankin's Dark Entries since it featured the occult detective, John Constantine.

Interestingly, I know *of* both Rankin and Constantine, but from afar. Rankin is the author of the Inspector Rebus series of novels. All I know about Rebus is that he's well, an inspector. I knew about the same about Constantine until he made an appearance in Volume 1 of the Sandman series. An occult detective. Interesting. In the Sandman story, he helped the main character, Dream, locate one of Dream's lost totems.

I suspect with a job like occult detective, Constantine faces some pretty hazardous jobs. For Dark Entries, Constantine must face something even more dire: Reality TV. Matthew Keene, smartly-dressed television producer, comes to Constantine with an interesting problem. He's producing a show called "Dark Entries." It's basically set up to have a group of celebrity-craved nobodies agree to stay in a house. Then, once they've be acclimatized to the house, the producers will start making the set haunted. The more fear generated, the higher the ratings. Nothing wrong with that premise. Surprised it hasn't really happened yet.

The problem is this: the house/set has started it's own hauntings early. Strange and mystical things have started terrorizing the contestants before the producers are ready. And they want Constantine, with his unique brand of expertise, to take a look at some of the footage and see if he can't figure out what's going on. He does and then he makes the obvious conclusion: he has to go inside.

Then the fun begins.

I can't write too much about the "fun" because, well, it's a huge spoiler. Needless to say, Constantine and his fellow contestants must figure out what's happening and why without any "help" from the outside.

I'm curious how Rankin's novelistic style differs in his own books rather than in this graphic novel with a character he didn't invent. Via Constantine, Rankin gets to vent about modern celebrity culture and the vacuousness of a lot of television, reality or not. His English colloquialisms are abundant, helping to remind this American that Constantine is, in fact, British (and not Keanu Reeves). The puzzle is self-contained within the story. That is, you, as a reader, are not presented clues with which you can deduce the ending. As a result, you're just there for the ride. It's entertaining, but not very lasting.

This being an illustrated comic story, I have to give some time to the artist, Werther Dell'edera. An Italian, his black-and-white art helps the story along perfectly. Remember the opening shots (during the credits) of "The Killers": the long shadows, the stark whites alongside even starker blacks? That's how this book is throughout. In a neat, visible cue, once "the fun" begins, all the pages are black, bled to the edges. You can see the white first half of the book and the black second half. The drawings themselves shift, depending on which character is in the scene. You go from simple lines drawings to fleshed-out art, sometimes frame by frame. Like everything with this book, I've not heard of Dell'edera before this. I'm glad I have now.

Dark Entries is a curious book for Vertigo *Crime*. I consider there to be a difference between mystery fiction (people trying to solve a mystery or puzzle) and crime fiction (stories of thugs, criminals, and the hard-boiled cops that chase them, often with a good dash of social fiction thrown in for good measure). Rankin's book definitely falls in the mystery side of things. Judging merely by the covers of the other Vertigo Crime entries, it might be by itself in that regard.

Ian Rankin and Werther Dell'edera have crafted an interesting tale of the supernatural with a jaded eye towards once facet of modern life. The middle section--where "the fun" begins--was a nice surprise and the latter half of the book certainly picked up the pace. It's a good, enjoyable read, although one that won't make you think too long after you've closed the book.
Posted by Scott D. Parker at 1:00 AM

Sounds so cool. You nerds are makin me wanna hit the comics shop.

I feel really out of it that I haven't tried one of these yet. But I hate following a story from panel to panel as graphic novels demand.