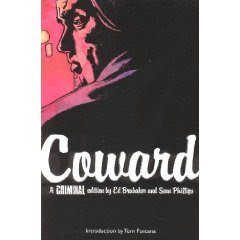 I enjoyed reading fellow DSDer Jay have a go at the history of crime in comics these past two weeks (part 1; part 2). It got me to perusing my bookshelves and I happened upon my collection of crime graphic novels by Ed Brubaker and Sean Phillips. I read the first one, Coward, a year or so back and thought I'd post my review here (from my own blog). While Jay's posts inspired me to re-visit this older post, I'm also under the gun for two projects, both due by month's end. So, a reprint for today. Enjoy.

When you think of comics, I bet you think of superheroes in spandex. Nothing wrong with that. But there used to be a whole other realm when someone mentioned comics—horror, mystery, crime, and terror—in the late 1940s and early 1950s. Then, with the Comics Code Authority, much of what was in comics evaporated and the superheroes were neutered. Crime-focused comics fell under that knife and stayed dormant for decades. By the 1970s, when I began collecting comics, I don’t even remember any crime comics out there. And I’m not including Detective Comics that long ago became just another vehicle for Batman. No, crime comics died and only rarely rose up to see what was going on. The only crime comic title I can think of before the 1990s was Max Allan Collins’s “Ms. Tree.”

The late 1980s saw the introduction of a newfound realism in comics. The emergence of the graphic novel as a medium proved that comic books were not just kids’ stuff. DC Comics launched the Vertigo line of comics intended for mature readers and focused on subjects more intense than Superman trying to get the alien imp Mr. Mxyzptlk to say his own name backward (thus banishing him back to the Fifth Dimension). With this new attention being paid to comics as a storytelling medium, it was inevitable that crime comics would be re-born.

While the re-birth cannot be attributed to one person, there is one man who can take a large amount of credit for the revitalization of crime in comics. Ed Brubaker bounced around the comics’ world, writing his own material that was usually crime-related and putting his own unique stamp on standard heroes like Batman, Catwoman, and the X-Men. In 2007, he and artist Sean Phillips launched a new title, “Criminal” that featured multi-issue story arcs. The first five issues have been collected in a trade paperback.

“Coward” tells the story of Leo, a pickpocket with a genius gift for planning heists. He got the gift from his dad and his dad’s best pal, Ivan. Over the years, Leo has internalized his father’s rules, one of which is always have more than one way out of a situation. Leo lives by these rules and he has survived. The fallout is that he knows when to bail—and does—and he’s earned himself the reputation of being a coward. He’s cool with that, however. As he tells one character, “My ego can take a few morons thinking they scared me.” What Leo realizes (too late) is that his aloofness turns people away, even people who try to get close to him.

Leo’s gone under the radar in the five years since the Salt Bay heist went belly up. He takes care of his dad’s friend, Ivan, now a heroin addict with early onset Alzheimer’s. But an old friend shows up asking for Leo’s help in a heist. It’s a big payday: an armored car full of trial evidence including $5 million in diamonds. Leo says no way. “I’m out of that line of work.” Then his day nurse (the one looking after Ivan) quits. Greta, whose husband died on that botched Salt Bay job five years ago, shows up, cajoling Leo to help. She’s a recovering addict with a kid who needs some medical bills paid. Suffice it to say, Leo agrees and sets out to plan the perfect heist. He’s working with crooked cops and he knows he’s going to be double-crossed. It’s just a matter of time. But what he doesn’t know is that the double-cross is going to allow him and a wounded Greta to get away with the real target in that evidence van. Only when he sees the prize he’s stolen does he start to form another plan, a plan to get himself and Greta out from under the thumb of the guys looking for that briefcase, and, while he’s at it, see about getting paid for his services.

“Coward” is a joy to read. Oh, it’ll slap you in the face with its realism and it’s language, but it’s still a rush. The language surprised me. If filmed, this would only work as an HBO program as the language is rife with four-letter words. But that’s how real criminals talk so no harm, no foul. The plot is tight. Brubaker plays his cards close to the vest, not revealing the true nature of Leo’s actions and outlook on life until late in the book. The artwork is film noir on paper. Sean Phillips uses shadows and light exactly as a director did in the late 40s, giving “Coward” its visual tone that matches the bleak outlook of its text. This is a noir story, not necessarily hard-boiled. There is a bleakness to Leo’s story that permeates most characters as they question their motivations.

In a nice touch, there is a story within a story. The characters all read the newspaper and most of them read a comic strip featuring Frank Kafka, Private Eye. Okay, you can start sniggering now. But the name Kafka and the story being depicted speak to Leo’s story and vice versa. It’s a style Alan Moore used brilliantly in “Watchmen”—except he used three stories.

I’ve been interested in crime comics for a little while now and decided to start with Brubaker’s work. This will not be the last trade paperback I buy. Next up will be "Gotham Central," Brubaker's story of the Gotham City Police working under the shadow of Batman. “ Coward” has merely whetted my appetite for more crime comics, modern as well as golden age. If you like crime fiction, there’s more to it than just novels and short stories. Try the comics and start with Brubaker’s work. Don’t worry: they’re so good, you won’t have to hide them.
Posted by Scott D. Parker at 1:00 AM

Great review Scott. Think i'll go back and read it again. You read the follow up, LAWLESS?

I have Lawless and The Dead and the Dying. Haven' read them yet. re-reading this review makes me wanna.

I became a fan of Brubaker through his recent INCOGNITO series at Marvel. Gotham Central is next on my list, but I'm definitely going to check out COWARD.