The Beginning of a New World

I used to love album covers. Back in the early seventies some friends and I drove from Montreal to Plattsburgh, New York, to buy Alice Cooper’s School’s Out album because the Canadian version didn’t include the panties. Yeah, that’s right, the vinyl record was wrapped in a pair of pink panties.

For years I had both posters from Pink Floyd’s Dark Side of the Moon on my wall. The only way to get the posters was to buy the album.

I used to buy records at Dutchie’s Record Cave on Stanley Street in Montreal and ride the bus home studying the album cover.

One wall in my first student apartment had been painted in what I thought was a pretty good attempt at Roger Dean, Yes-style cover art. I can’t remember which album cover it was, but I do remember it was the one with Astral Traveller and Sweet Dreams. 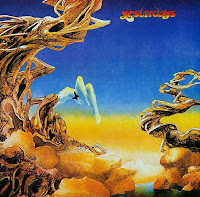 I haven’t bought new music in quite a while but last week I went online and bought, of all things, the Peter Framton album, Fingerprints, an instrumental that came out in 2006.

I have no idea what the cover art looks like, or even if there is any, but Frampton is just as good a guitarist as he was when that got lost in his pop music fame.

And that’s kind of my segue to books and specifically e-books.

This is in part inspired by Tess Gerritson’s, The End of the World as We Know It? blog post, because while that may be true, the new world might not be so bad.

All the reports that mention Ms. Gerriton's blog refer to her as, “bestselling author Tess Gerritson,” and that’s great for her, but there are a lot of writers like me who know we’ll never be bestselling authors. I don’t know, was James Crumley ever a bestseller? Even George V. Higgins had a lot of success with The Friends of Eddie Coyle, but I think a lot of his other books are out of print. I’ve been tracking down books by those guys and a few others lately and it’s been tough. I’ve been using Abebooks and looking all over online for used copies because a lot of the books I’m looking for aren’t even in print anymore.

There are thousands of books like The Super Summer of Jamie McBride which are out of print and yet Amazon or Abebooks will sell me a used copy. The author, or his or her estate, gets no money from that sale. If it was an e-book, always in print, he might get a quarter. Okay, so it’s not much but you never know, over years it may add up.

For a writer like me that matters. I’m not worried about having a bestseller, I’m worried about people who want to buy my book being able to find a copy.

When I started writing I dreamed about having huge bestsellers, being as popular as Ian Flemming or Robert Ludlum. Then as I got older that changed. First it turned into a sort of hazy dream about being a kind of drunken genuis, hanging out in bars and, well, that one was always kind of vague and never really made sense.

But then I hit on my current dream, the one that’s stuck with me the longest:

I dream about being able to make as much money as a writer as I would as a school teacher.

A quick look online tells me teachers make about fifty grand. Okay, let’s say I make a buck a book (averaged out between hardcover, trade, mass market and e-book) so I’ll need to sell 50,000 books a year.

Wow. Okay, have to look into that drunken genius thing again...

All right, all right, with print runs less then five thousand it's unlikely I'll ever sell fifty thousand copies of a book. Right now I have publishing deals in Canada and the USA, so I'll need a deal in the UK and Australia and everywhere else people speak English (I don't expect to ever sell English books in non-English speaking countries, imagine how much a special order import would cost) and I'll have to get translation deals. So far I haven't been able to get a foreign deal and one of the main reasons given is that my books haven't sold enough copies in English. An Italian publisher, for example, would have to buy the rights to the book, pay a translator, design a new cover, print up a lot of copies, do some marketing and promotion, ship books to bookstores and hope to sell enough copies to make a little profit.

But with e-books, always available around the world, I might sell enough to make as much money as a substitute teacher.

And that's a chance I'm willing to take even if it means some books will be pirated. Right now some books are shoplifted, some are damaged in shipping and sent back and some are simply returned unsold. Lots of books are given away free as ARCs. Who pays for those?

Yes, it may be easy for me, lucky to sell a thousand copies of a book, to say I'm willing to risk having a few pirated, that's a lot different from a bestselling author who sells 100,000 copies and has 20,000 copies pirated. What about the twenty grand extra they might have made (I still think most people who download illegal won't buy legally)? I don't know about that.

These days it seems there's an awful lot being written about the publishing "industry" in every newspaper at the same time all those papers are cutting back on their book review sections.

Maybe when the fad of e-books and e-readers and book pirating passes we can go back to talking about books. Newspapers will be available on e-readers and you never know, they might bring back book reviews.

Most of us will never be Pink Floyd. We’ll be lucky to be Wishbone Ash. 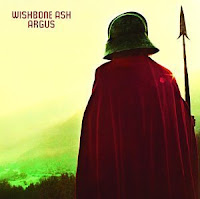 Posted by John McFetridge at 12:08 AM

Yes, but to be Wishbone Ash would be quite good. I was just listening to Live Dates tonight. Not many better albums out there.

I hope you succeed in your quest.

John, I'd be happy to be Barclay James Harvest. Or Joe Dolce for that matter... Gatefold sleeves were a thing of beauty. Journey To The Centre Of The Earth by Rick Wakeman with a free piece of...SILVER FOIL! Those were the days. Life is loss!

Now you've made me crave albums again. Gatefolds, lyric sheets with font large enough not to need a magnifying glass, extras like posters, stickers, balloons, shopping bags, cut-outs, and yes, panties. Decisions: do I leave the cellophane on or tear it completely off? Studying the liner notes, reading all the credits, getting the details. And listening, really listening to the album as a whole, and not just putting the songs into random play and forgetting how the album sounds as a whole.

Ah, Cosmo's Factory. Takes me back.

JD Rhoades has a good follow-up post to the Tess Gerritsen piece you referred to on Murderati. His thought are more in line with John's. Things are going to be different, but it's not like making writing from writing is going to go away, and it's going to take a long time for paper books to go away, if they ever do.

For what it's worth, I don't buy a lot of music, but I buy CDs when I do. I still like the idea of a unified album, seeing how all the songs relate to each other. What I like about CDs over vinyl is that I can skip around when I'm so inclined. Plus, the liner notes have the potential to be much better, with the little booklets that fit into the jewel boxes. Few take full advantage, but it's great when they do.

I just got a CD of Whiskeytown from the library. There were no lyrics inside just credits and a picture of a feral cat. Why can't they even include lyrics so I can understand what they're saying. Is that too much to ask? No wonder people just download.

I admit I was a little surprised when looking up Wishbone Ash to find videos on YouTube of them performing in 2007. They never really cracked the North American market.

Yes, Dana, I like full albums or CDs too, which is why I'm glad that's the way I can buy them online now.

I remember when the first CDs came out (Graceland was so big) and for an amateur like me with not such a great ea they were a big improvement on LPs for convenience and at first I could still read the liner notes but I did miss the posters and booklets and other giveaways. I was surprised to see vinyl disappear so quickly - as surprised as I am to see it coming back.

So, I won't be surpried if some kinds of books (mass market or trade) disappear quickly - and then make a comeback sometime down the line.

Maybe we should start giving away posters with books - or panties or something...

Loved albums. I cut my teeth on 1970s KISS and Star Wars (with cool stuff in them). Now, I've made the paradigm switch. I prefer to download my music (legally!) from iTunes. It's nice when the lyrics are included in a PDF file but I can just as easily go to the band's website and find content there. What I wish they'd do is include the liner notes in a file the iPod can read. I have to convert them so I can read them via Notes.

As for books: the paper book will never go out of style. It's too functional. However, e-reading will become a larger and larger piece of the reading pie. Here's the irony: I love a book b/c it does one thing perfectly. I don't like current e-readers (Kindle, Nook, etc.) b/c it doesn't do enough things. I'd like the ONE device that will be my music/movie/reading/internet/phone thing. I welcome the simplicity of a one-device system.

Yeah, Scott, more and more I'm leaning towards the one device idea.

I used to think I wanted a dedicated book reader the way I like the one-function book and I was worried about the single device interrupting my reading time with phone calls and so on, but now I think the one device I always have with me could be very good.

The Beach Boys' PET SOUNDS album, which first came out in the mid-60s, has been reissued many times, including boxed CD sets commemorating its 30th AND 40th anniversaries. Naturally, each of these sets contains a dizzying array of bonus material. When you consider the original LP came with only the songs and a Capitol Records inner sleeve, (not even liner notes or credits!), the CDs don't sound like such a bad deal.

Parable translation: if the publishing business can snap to ideas like that, they would take a giant step toward ensuring their stability in the future.