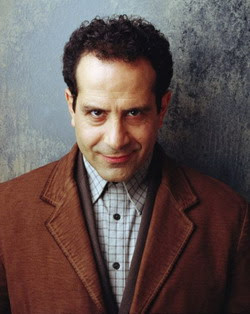 And so it ends.

Last night, the series finale of the USA program, “Monk,” aired. Eight years after the world was introduced to one of the quirkiest detectives ever created, the creators and stars decided to call it quits. They did it in perhaps the best way possible.

I can’t say for sure why I first decided to watch Monk. Might’ve been the promos because I didn’t know who Tony Shaloub was back in 2002. Could’ve been because it was summer when the show premiered and their wasn’t much on that night. Whatever the reason, one episode was all I needed to latch onto this brilliant detective who just absolutely, positively had to touch every lamppost along his walk or straighten every crooked item he encounters.

For those of you who never watched Monk, it’s a traditional police procedural. There is a crime--usually not too violent--and the San Francisco police bring in Monk, a former SFPD detective who was relieved of duty following his emotional implosion following the death of his wife, Trudy. Monk’s long-term goal is to find the man who murdered Trudy. It’s a thread that runs throughout the entire run of the show and he solves the case in last night’s episode.

As straightforward as the police/mystery part of the show is, it’s not usually enough to keep watching. It’s the characters that made me return week after week, season after season. Adrian Monk himself is a challenge to watch. His quirks and phobias can be, frankly, annoying and get in the way of the show. I’ll admit that my watching lapsed for a season or so because I started rolling my eyes at certain parts. I mean, come on: how many times do we have to see Monk getting weird about the same stuff?

Tony Shaloub’s performances, however, is what gave this show its heart. Originally conceived as an Inspector Clouseau-type person, Shaloub gave Monk’s tics context. There were times when you could tell Monk didn’t want to have to straighten a frame or put all the pencils in a row but he *had* to. A lesser actor wouldn’t played the phobias for fun all the way and all the time. Think Leslie Neilsen. Shaloub gave Monk torment. That torment was never so heartfelt than in "Mr. Monk and the Kid" when Monk took a case involving a young boy. Adrian saw himself in the lad and agreed to look after the boy until his foster parents took custody. Late in the episode, Adrian realizes how much he cares for the boy and know he can’t keep him. Shaloub put so much emotion into Monk’s face that there wasn’t a dry eye in our house that night.

All in all, it was the little moment in the series that set it apart from other cop shows. Both of Monk’s assistants--Sherona the hot head and Natalie the caregiver--catered to Monk eccentricities and allowed his to live a life that was, for him, normal. Captain Stottlemeyer and Lieutenant Disher, the two lead SFPD detectives, knew that Monk was the best detective in the business and he made their jobs easier. One favorite moment with Stottlemeyer was when the crime scene was in a warehouse and there was bubble wrap. A large sheet of bubble wrap. He sees it, knows that Monk will *have* to pop all the bubbles, and calls over a couple of officers in uniform. With determination, he tells them to start popping. They do and the scene fades out. Brilliant.

What was also brilliant was how the show ended last night. Some famous shows, like M*A*S*H or Friends, end by changing the events within the TV show. The Korean War ends, thus, the members of the 4077th go home. End of series. Others, like Everybody Loves Raymond and The Cosby Show, take a different approach. The writers let you know that the characters are still alive, still doing the same old things you’ve seen them do countless times, it’s just that we’re not going to show you any more. (Spoilers ahead for those who haven’t seen the show and want to.) That’s how Monk ended. He solved Trudy’s murder and made some adjustments to his life. He’s still got quirks but he’s moving on. He’s loosening up. He’s sleeping in the middle of the bed...finally. I’m looking forward to seeing how Lee Goldberg, the author of the Monk novels, incorporates these changes into his future books.

I’m re-reading the four Sherlock Holmes novels in advance of the new movie. (The review of A Study in Scarlet is up at my blog now.) Along the way, I’m being reintroduced to the strange, quirky, eccentric things Holmes does. To be honest, Monk makes his strangenesses downright normal compared to the stuff Holmes does. Monk, really, is just a direct descendant of Holmes and, before him, Poe’s Dupin. Someday down the road, we might get introduced to another detective who will be the “next” Monk. That’s the way the marketing executives will try to sell us the product. Suffice it to say, there is only one Adrian Monk. And I, for one, am sad to see him leave.

Are there any Monk fans out there? What are some of your favorite episodes and moments from the show?
Posted by Scott D. Parker at 1:00 AM

I LOVE Monk. It's the cast that make the show. Great comic turns from all. Some good cameos too. John Turturro, for example. I only started watching last year and we're way behind in Poland so I've got a lot to see.

Amen to all of the above.

I've loved Monk since the beginning because it's such a writerly show. The words matter, and almost every ep had at least half a dozen perfectly tuned lines -- surgically correct writing delivered with jazz-natural timing.

Now if you'll excuse me, I have to go dry my husband's tears and assure him that he *will* learn to love another detective.

I have seen a lot of the Monk episodes over the years. I love him-but find the other cops a bit thinly developed. Lots of brilliant concepts with what to do with him though.

The first MONK book set after the finale episode of the show won't be out until a year from now. In the mean time, there are two more novels set before the final season -- MR. MONK IN TROUBLE, which came out this week, and MR. MONK IS CLEANED OUT, which will be published in July.

Monk and Psych are my two absolute favorite shows. I am so sad to see Monk go, but I thought they ended it beautifully.

My favorite Monk episode was the two-parter where Stottlemeyer pretended to shoot him. I loved seeing how much the other characters cared about him, even when they are complaining about him.

I started watching the season that Natalie came on, so I have a hard time watching the episodes with Sharona. I always thought she was too mean to him. :)