Publishers Weekly has reviewed my upcoming novel, Let It Ride (which is known as Swap in Canada where it is already available). 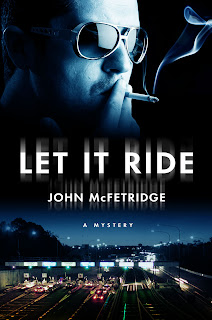 Too many characters and points of view throw off the rhythm of this sprawling homage to caper-master Elmore Leonard from Canadian author McFetridge (Everybody Knows This Is Nowhere). Venard “Get” McGetty, a vet who served in Afghanistan, crosses the border from Detroit to Toronto looking to exchange guns for coke. As Get takes in the scope of the action of the Saints of Hell gang, he meets Sunitha Suraiya, a whore with big plans. Big Pete Zichello, a rival holdout targeted for elimination, tries to fight back, while Richard Tremblay, the head of the Saints of Hell who brought all the other gangs into line, tries to buy time for his last move. Meanwhile, Get and Sunitha hatch a daring plan to steal a jackpot of gold. Amid the busy plot, McFetridge does a good job depicting a crime-ridden Toronto (aka the Big Smoke) that resembles the wide-open Chicago of Prohibition days with corrupt cops, gang warfare, and flourishing prostitution. (Feb.)

That's a pretty good summation of the events.

And, of course, it has me a little worried because the book I'm working on now probably has just as many characters and points of view. Not that I can do anything about it, it's the way I write and pretty much the only way I can write (I know this from years and years of failure trying to write other ways).

Besides, I find the, "too many characters," complaint is something I could see more for a movie. I like books that dig into a lot of different characters. It's one of the things that a book can do much better than a movie (which isn't to say I've done it well in Swap/Let It Ride, just that I'll keep trying to get better).

And I do prefer books that aren't trying to be movies.

Obvisouly there are some clear differences between watching a movie and reading a book and I wonder if it affects the content.

Movies we (usually) watch in one sitting and they have a self-contained story. If there are too many characters, too many sub-plots or points of view it can be very confusing and it's not easy to flip back and see something again. Especially if we're in the theatre. Turns out people yell, "Sit down, old man," when you try to get the projectionist to rewind.

Of course, watching movies at home makes this a little easier, unless your wife keeps saying, "Would just pay attention, that's the guy who sold him the gun, sheesh."

TV shows have changed in my lifetime from completely stand-alone episodes that often contradicted earlier episodes to season long arcs. Sometimes I wait until the DVD box set comes out and watch a whole season over a week so I have at least a small chance of remembering if Bubbles is out of rehab.

But books, books have always been a solitary experience. I can flip back as much as I want to see who that guy is. Sometimes I end up rereading earlier passages and seeing them a whole new way. Okay, once a guy on the subway let out a frustrated sigh when I turned the page backwards instead of forward but he was getting tired of me reading so slowly anyway.

TV used to have an inferiority complex (this is something we're experts on here in Canada) and tried to compete with the movies. I guess sometimes it still does, but cable TV has really started to figure out what it can do better than the movies - deeper, longer, character-driven stories. The Wire could never have been a movie. Mad Men, Deadwood, The Sporanos - none of them could have been very good movies.

And books are still books. As long as it's still possible to fill books with lots of characters and lots of points of view, that's what I'm going to do. I've been reading George V. Higgins lately, books that were published in the early 70's and they have lots of charcters - I'm flipping back fairly often to see what these guys did earlier but I don't mind. Sometimes I'm surprised that since the 70's crime novels haven't gone even further in this direction.

Oh, and no review of Swap/Let It Ride has ever mentioned the murder of the husband and wife on their way home from a "lifestyle" (wife-swapping) event. Now, if that show Swingtown had been cable, it might still be going...
Posted by John McFetridge at 3:02 AM

Email ThisBlogThis!Share to TwitterShare to FacebookShare to Pinterest
Labels: Let It Ride, review

Too many characters. I heard the same thing about my multi-POV FBI/Mafia story no one will touch.

Sometimes I get the feeling that for all the talk about nuanced characters and ensembles, what people really want is a man and a woman passing through multiple two-dimensional figures to get to the story's resolution, then have sex. Maybe a funny sidekick. Nothing more complicated than that.

I loved SWAP. Fantastic stories running through there. Tons of movies -- CRASH, MAGNOLIA -- get all fancy with stories colliding. I think seeing this in books is great. You can always page back and see who did what if you get lost.

While I enjoy following a character through a series of episodes that leads to finding the missing MacGuffin, the McFet books with all these whackos, er, interesting people trying to do their best with what they got are great reads. (Nominee for the ugliest sentence award. Sorry.)

Why does everyone have to write the same book?

I think Dana makes a good point. For every person who wants something new, something challenging, moving or bar-raising, there are just as many people who want that normal linear story that theyve seen/read before.

Which is fine, there's room enough for all tastes. It gets my back up when reviewers seem to forget that.

I havent read SWAP yet, but if its continuing the smooth progression from DS and EKTIN, then i wouldnt trade that for a hundred simple thrillers. I'd rather see how far you can push this ensemble approach.

Cheques are in the mail, thanks guys.

The thing is Jay, I'm not sure there are, "just as many" people who want every kind of book, but I hope there are enough.

And Dana, I hope when the dust settles publishers return to their "core business" and do what books can do best.

My writing group complains if I use two POVs-one first person and one third with big splashes of white between. I don't get it unless it's hard to figure out who's talking. From what I read of this book, it wasn't hard to follow the action at all.

Do you suppose all this complaining about too many darned characters and, oh, all that other confusing stuff, is coming from the now-grown-up MTVers with short attention span?

Sounds great to me. Bet I like it. Bet I like Dana's book too.Multiple POV have worked well in the past. Can keep things fresh. What's wrong with complicated?! If Dickens were alive today he'd be spinning in his grave!

Mike, I have no idea if this is the MTV generation, lack of attention span, but that's certainly possible.

I am happy to see that the TV shows I mentioned were all very well-received and are all quite complicated with lots of characters and thematic subtleties.

And there are quite a few novelists like Richard Price, James Ellroy and Elmore Leonard writing very successful, complicated, multiple character, multiple-POV books.

I think this is just a case that my book isn't in that category (well, duh). If it was, I don't think the reviewer would have this complaint.

But like I said, I'm just going to keep going and trying to get better.

I'm just now finding that the multi-character multi-viewpoint style is the way I write best so I sympathize. It's also the kind of book I like to read the most and I can't wait to read this one.

And for every one they say doesn't work or doesn't sell there's an Elmore Leonard or Tim Dorsey or any number of others who suceed with it.

Hey! I'm from the MTV generation and I don't have a short att--