In Rocky IV, after the in-ring death of Apollo Creed at the hands of Ivan Drago, Rocky journeys to Russia to train for his revenge bout with the evil roided up Russian. While in training, in a barn with only Apollo’s former trainer and cousin Paulie for help, Rocky puts a picture of his opponent on his bedroom mirror so that he can stare at it. I think it was supposed to drive his training with the fuel of champions—hate. But was that the only purpose the picture served? What if instead of hate, the picture was a constant reminder of the level Rocky would have to exceed to avenge his friend. For Rocky to beat the Russian, he would have to become better than the Russian.

I have a few pictures pasted on the glass of the Rocky Balboa Russian barn bedroom mirror of my mind. A few things that are always on my mind when I am trying to write.

1. The first three pages of The Hunter. It will eventually get old reading this on the blog again and again, but Richard Stark changed my life and made me want to be a writer. The first time I read the Hunter I re-read the first few pages a million times. The description of Parker is so perfect, so raw, so mean; it was like nothing I ever read before. I remember I was reading The Stone Angel for school at the time and I never finished it. I hated the book because compared to The Hunter it just seemed boring and mundane. If you have never read it (and feel the appropriate amount of shame for all that you have missed out on) check it out: here.

2. Cape Fear – I’ve been at this a few years and everything I have done has pretty much centered around the bad guy. There is something about the bad guy that appeals to me. I can trace back my fascination with the bad guy to one movie in particular: Cape Fear. I remember seeing the movie when I was younger. My mom and dad rented it because they had seen the original and they were interested in the remake. The scene that I rewound and watched again and again was the one in which some hired thugs are going to teach Max Cady a lesson and force him to leave town. Max Cady was the worst thing I had ever seen and he deserved the beating and then some. But there was something about the way he took everything the thugs had and then took them apart. He stopped being bad and started being cool. I didn’t watch the rest of the movie to see the lawyer win. I watched it to see how much it would take to make Max Cady lose. Every time I write a bad guy I always go with that sentiment in mind.

3. Daredevil – I’m a Batman guy plain and simple. Don’t try and tell me Superman could kill him and don’t even think about trying to lecture me about comics being kids stuff. My fist is all grown up and it will fit up your nose. Batman aside, there is a particular Daredevil scene that has been etched into my brain. It is far and away one of the greatest things I have ever seen on paper. (If you haven’t read the Brian Bendis and Ed Brubaker runs on Daredevil you are missing out on some of the best crime writing around). To set it up, Matt Murdock (Daredevil) is walking home with his wife. He has recently outed himself to the underworld. Everyone knows who he is. Think about that. Instead of hiding behind a mask or a secret identity, Matt Murdock has told every criminal who he is. Even more reckless, Matt has taken over the role of the Kingpin of Crime. Daredevil is in charge of all of the criminals in Hell’s Kitchen. So anyway (not to nerd it up too much), while Matt is walking home with his wife he suddenly stiffens. He sends his wife away and turns to face 100 yakuza coming for his head. The next image is the one that is permanently in my cerebral cortex. I spend hours a day visualizing scenes in my head to get the right effect for a chapter, but I have yet to conjure an image in my head that feels as cool as this. 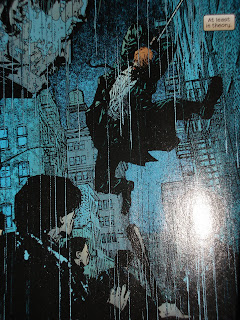 Keeping these images in my mind when I write may not do the same for me as it did for Rocky. Beating a steroid enhanced Russian is way easier than equalling muscular writing of Richard Stark. Training in the wilderness is a breeze compared to brawling in the street with Max Cady. The best shot a homicidal communist can throw will never look as skilful as the image of a blind superhero diving into chaos.

I may never beat the giants pasted on my mirror, but I keep swinging and if I ever get close, I’ll go down happy.
Posted by Mike Knowles at 3:00 AM

Mike-If I already asked you and you said no, forgive. Or if you did one and I overlooked it, forgive. But would you be willing to do a "forgotten book" maybe late November, early December?
http://pattinase.blogspot.com

I've never thought of it as pictures taped to a mirror, but I have different, if similar, kind of "cornerstone" images or characters. Some are in the vicinity of my desk, others are sometimes the wallpaper on the PC I work on, and other times they are in my head.

What is this forgotten book you speak of?

Great post, Mike. And thanks for the link to "The Hunter". Tougher prose you will never find.