Something a little diffferent on Do Some Damage today. Three of us are taking part in the Flash Fiction Challenge, "Wal-Mart: I Love You."

Before we get to the stories, I'd like to thank Patti Abbott, Gerald So and the Mystery Dawg, Aldo Calcagno for running these challenges. This is the third one I've taken part in (Steve and Jay are Flash virgins) and they're a lot of fun.

This challenge was simple - write a flash fiction that has something to do with Wal-Mart. Some of us used the website People of Wal-Mart for inspiration.

In the comments on this post Peter Rozovsky (of Detectives Beyond Borders fame) suggested that someone put all these stories between covers and sell them at Wal-Mart. Well, not exactly, "between covers," but Patti Abbott and Steve Weddle did collect all the stories and Untreed Reads is making the collection available as an e-book, Discount Noir. 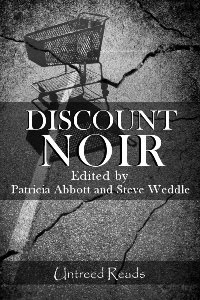 The book is available for Kindle from Amazon, from Smashwords, from the Untreed Reads site and from many other online retailers.

It's a terrific collection, over 4o stories from some of the finest crime writers working today (and one from me) all in one place. I bought my copy from Smashwords and it looks great and reads well. Taken together, these 40+ stories tell a much bigger story about a moment in time then anyone could have predicted when the challenge was issued.

And I don't think this will be unique to this collection. I think this is just the beginning of where "cloud writing" can go in the future.

So now that the stories are collected in an anthology, we've taken them down from the blog. But really, go buy the collection, it's worth it.
Posted by John McFetridge at 3:05 AM

Nice. Now I'm thinking about all of the cash that goes through a Wal-Mart...

Nice work. The descriptions, the conversations, the little pieces of flavor. This one screams McFet all over it. Really nice.

A very savy and well researched story, John. Just what I would have expected from you.

Ditto Steve. I like how the darkness increases through the story and doesn't lighten up at the end. Giving a story like this a happy ending is a cop-out; this ended as it had to.

Great story, and I like the way he predicts her bleak future.

Well, she could begin robbing Walmarts, couldn´t she?

"Part-Time" is quite a ride. Great details, yet so tightly written. Nice job!

This is my favorite thus far...still making the rounds...

Great stuff. The guy in the garbage bag shirt had me laughing out loud.

love this story.This is JT from Everybody Knows, right?

I bet you're one of those guys who watches ordinary events and figures out where the scam could be; the kind of guy born to be either a writer or a criminal! I do that too....hope i turn out to be a writer....

The ending was perfect.

Hey, John, good job portraying the joyous human pageant that is WalMart. JT? Good man. He thinks like Parker.
==============
Detectives Beyond Borders
"Because Murder Is More Fun Away From Home"
http://detectivesbeyondborders.blogspot.com/

Thanks everybody, this was a great day. I read a lot of very good stories.

Someone should really be collecting them and making some kind of archive.

And, yes, Jay, that's JT from Everybody Knows This Is Nowhere. He's also in Swap/Let It Ride. Sometimes it scares me how easily I see the world from that sociopath's point of view, but luckily I'd never have the balls to try anything he does ;)

"Someone should really be collecting them and making some kind of archive."

Or put 'em between covers. You could sell them at WalMart.
==============
Detectives Beyond Borders
"Because Murder Is More Fun Away From Home"
http://detectivesbeyondborders.blogspot.com/

Great reminder of how much I dig your stuff (I mean this in the non-gross way).

This is excellent, John!