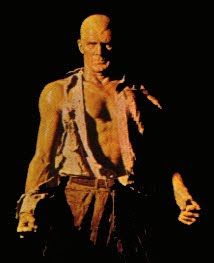 I’ve been thinking a lot about heroes recently, super heroes specifically. The comics industry lives and dies by heroes. The early pulp era had their share as well. I’ve been reading “The Land of Terror,” the second Doc Savage novel. Published in April 1933, this novel is darker than the debut book. Doc actually takes out some of the bad guys and doesn’t give it a second thought. I’ve read that this story is among the darkest of all the Savage novels Lester Dent wrote.

The thing that strikes me about Doc is his infallibility. Simply put, the man can do no wrong. He has his Fabulous Five (Monk, Ham, Renny, Long Tom, and Johnny) and Dent describes these guys as without peer in their respective area of expertise. Doc exceeds them all. Like Tarzan, Doc Savage is incorruptible and he shies away from the ladies. If he was a cowboy, he’d wear a white hat. You never have to worry if Doc will do the right thing. His word is good all across the globe. If Doc Savage is on the case, the public can breath easier. If you’re up to no good and Doc’s after you, winning is not an option for you. Plain and simple, Doc will prevail. He uncomplicated in his goodness.

Nowadays, all our heroes are all complicated and they wear gray hats. Hell, some of them wear the black hats. There’s nothing wrong with this kind of heroes and, frankly, they are interesting to read and follow. But where did the true-blue heroes go? Where are the heroes who, when they walk on stage, you don’t have to wonder what they’ll do?

More importantly, what happened to them? I’m pondering this question and one of the things I come up with is war. World War II, with all of its carnage and violence, spawned numerous literary creations, the hard-boiled, violent detective novels of writers like Mickey Spillane being but one example. Could a genuine hero like Doc Savage survive the war? Part of me thinks not. His magazine was cancelled just four years after V-E Day. Did our world become so complicated that an uncomplicated hero no longer fit in it?

I don’t have the answer although I think war and the violence of war is a factor. For those of you who wonder about things like this, what’s your take on uncomplicated heroes in a complicated world? Are there any out there now, on TV, in books, movies, or comics? If so, who are they? If not, why? Maybe we can think about this together.
Posted by Scott D. Parker at 1:00 AM

Did our world become more complicated, or did we start taking a closer look at it?

I like the idea that war would open all this up. In addition to the end of the white-hat hero there would be the end of the black-hat villian. Most men (like my father) who had direct contact with "the enemy" realized very quickly they were also just kids pushed into a hellish situation by powers (leaders) they couldn't stop.

And sometimes, during wartime, we realize that our own side isn't so virtuous - either towards the enemy or even when it comes it profiteering off ourselves.

My wife and I like Firefly but she gets mad at me when I make fun of Captain Mal's phoney moral dilemmas, when he pretends he may be selfish and not do the right thing. He always does the right thing.

John, interesting that you mentioned Mal. I'd written a log response talking about the way SERENITY played with the roles of antagonist and protagonist, but then i lost what i'd written.

And to your second comment, that's brought up something i heard recently. I haven't seen the film 'In The Valley Of Ellah,' but i heard an interview with the writer/director Paul Haggis. He said that part of the idea of the story was a generation of young men sent off to be David and fight Goliath, but when they get there they realise that THEY are Goliath.

We live in an age that doesn't trust virtue, and where pure ideaology is fanaticism. The deconstruction of the hero has been going on for a long time now. Its created most of my favourite fiction. At the same time, a question i've been asking friends privately recently; At what point do we move on from the middle act? When do we start putting the hero back together? Or is that what films like 'The Dark Knight' are already doing?

I think that Dark Knight is trying to do that. I never picked up on that before you said it though.

Last night's episode of Smallville had a lot to do with the uncertainty some heroes face. Clark basically told the Wonder Twins that he himself can't be infallible but what all the heroes together represent can be infallible. It's the faith in Superman that's important. Believing he will always do the right thing inspires other people to do the right thing.

I think Ed Brubaker's run on Captain America has addressed this question pretty well. Steve Rogers is a guy who has always been portrayed as a "white hat" kind of guy. And while Ed didn't write the Civil War event, it was done in context with his take on Cap. And Cap's decision on taking the side for what he thought was right put him, for the first time, on the side opposite from what the government was promoting, which made him an outlaw. I thought the fallout from that was interesting, where we see a heroic figure having to choose between his ideas of what are "right" and "good" vs. what the establishment/authority dictates. I loved the whole thing.

For those who don't know, Civil War was a Marvel Comics event where the government decided all heroes had to register with the government, which caused a split in the hero community, one side led by Iron Man (pro-government) with the other side led by Captain America. It resulted in the assassination of Captain America, which is still being played out in the pages of the comic.

Just look in the paperback "techno-thrillers" you find in the racks at the airport, drugstore, or Costco. You'll find plenty of uncomplicated, blue eyed, steely jawed heroes, who never feel any moral qualms or uncertainty, in those. Most of them bore me to tears.

Jay's David and Goliath analogy is excellent. We get told things by leaders or the media that don't hold up under closer scrutiny. The older stories where the superheroes were so uncomplicated depended on uncomplicated scenarios; collateral damage was never an issue. We know better now, in large part due to what we know about war and violence that we didn't know before. Bad things may have to be done to get a good result; the real question isn't what the good result should be but how bad are you willing to be to accomplish it? Sooner or later the hero will encounter a person or situation that doesn't lend itself to a binary answer; the older stories wrote themselves around these dilemmas.

I don't think so. Doc and his five aides were all in WWI - and that was hardly a picnic. If anything, it was MORE bloody and complex the WWII.

The concept of the hero started to change with the Fantastic Four and Marvel. That wasn't the forties and fifties, it was the sixties. If there was any social movement that led to it, my pick would be civil rights. Of course, you could say that the Civil Rights movement was related to WWII, since part of its impetus was the awareness of the contribution made by black soldiers. Jackie Robinson broke the color line in 1947.

Just want to point out that Jackie Robinson broke the colour line in 1946 with the Montreal Royals - the Dodgers top farm team.

Jay Stringer and the Fountain of Youth

The lovely and talented Jay Stringer, Do Some Damage's co-founder, has a new book out . Let's get to it, then, shall we? Ste...