Everybody Knows - the paperback 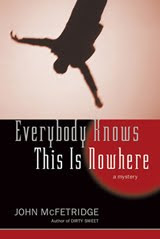 When we started this blog I was told that BSP (blatant self-promotion) was okay, so we're going to have a day of it today.

On November 1st (this Sunday), Everybody Knows This Is Nowhere wll be officially published in paperback for the first time. It's my second novel, and I think it's pretty good and I don't think it ever really had a shot at getting any sales.

There's a story there, of course, and I'll make it short. Just before the book was to be published in Canada by ECW Press they got a phone call from Harcourt in New York asking about the US rights. Very exciting. Harcourt bought the trade paperback rights to the already-published-in-Canada Dirty Sweet and the hardcover and trade paperback rights to Everybody Knows... (oh, happy day, especially for books from a small Canadian publisher - there was much rejoicing). Harcourt put together a couple of great covers, I thought, both books looked fantastic. I was told the trade paperback of Everybody Knows... would be "stylistically similar" to Dirty Sweet so they would like the loose series they are.

ECW delayed the Canadian publication to have it line up with the US date. Made sense. The book had received a couple of good early reviews in Canada, including a starred review in Quill and Quire. By the time it was being published in the US, the book had also received some good reviews from Publishers Weekly, "Complex... a fun read," starred from Kirkus, "It’s refreshingly hard to tell the good from the no-good in this helping of cops and robbers, Canadian style... Bristling action, a vivid sense of place and nary a plot twist telegraphed. Exceptional work," and Booklist, "Sex. Dope. Immigration. Gang war. Filmmaking. In McFetridge's hands, Toronto might as well be the new L.A. of crime fiction."

Needless to say, there was some excitement in my house. I'd been working for this for years and it was all coming together.

But then, just before publication, Harcourt merged with, or was bought by, or something with Houghton Miflin. My fantasic editor, Stacia Decker, was let go and I'm not sure if either of my books ever made it into bookstores.

Still, thanks to the amazing support from many people online, the word got out and we managed to sell a few copies - pretty much every one a special order, I think, so thanks to everyone who made the effort. I appreciate it more than you can know.

The new Houghton-Miflin-Harcourt (which I still think of as Harcourt-Dunder-Miflin) was no longer interested in my books. Not just mine, they also dropped Declan Burke (I still can't believe that) and Al Guthrie and Ray Banks. Oh yeah, they kept Philip Roth, go figure.

I wrote another book, Swap, that ECW has just published in Canada and I'm lucky enough to have it picked up by St. Martins-Thomas Dunne in the USA and they'll publish it in spring 2010 as Let It Ride.

But it looked like Everybody Knows This Is Nowhere was nowhere. It looked like a huge flop in hardcover and no one wanted it in paperback.

But now ECW has a new distribution deal for its books in the USA and Everybody Knows... will be available in trade paperback with the Canadian cover.

Most places are selling it for about ten bucks. If there's an independant bookstore near you they may have it and the chain stores should have a copy or two. Of course, there's always online sales:


I also made a promo video for the book:


Thanks again to everyone for all your support.

And, I'd like to give a copy to a reader of this blog (well, I'd like to give every reader of this blog a free copy, but it turns out this is a more popular spot than I expected). So, Steve has suggested that if you want a copy, leave a comment and we'll assign each comment a number and then pick one out of a hat. Actually he said something about a random number generator but that already sounds too complicated for me, so I'm going to go with the hat.
Posted by John McFetridge at 12:02 AM

Email ThisBlogThis!Share to TwitterShare to FacebookShare to Pinterest
Labels: Everybody Knows this is Nowhere, paperback

Harcourt sucks.
There, I said it.
I actually have the hardback of Everybody knows this is no where, so if I win the trade paperback is going to be one Hell of a cool gift for some one.

I can't speak for Al, but if HMH dropped me, they've got a funny way of showing it - the next Innes book comes out March 2010.

Anyway, glad to see EKTIN getting a new lease of life. Would've been a shame to see it slip through the cracks.

DIRTY SWEET and SWAP are great books. Looking forward to the "re-launching" of this one.

And, yeah, I know I'm not eligible for the freebie. Still wanted to mention how cool the books are.

Sorry about that, Ray. Nice to know Harcourt didn't lose its mind completely.

That's crazy. I'd love to read the book despite it not being published.

I like you John, I really do. But I suspect you were dropped because you're not any good and anyone who would publish anything you write is about as stupid as...er, wait. Never mind

As a not-yet-published author, your post was painful to read (and probably more painful to experience). Thanks for sharing and giving us all a taste of the *other* side of writing.

Yeah, Bryon, especially the short stories, anybody who'd publish one of those would have to have some connection to Canada or a Canadian, or, er, wait, never mind ;)

Your name may not even go in the hat!

I'm disqualifying myself from the drawing because I, too, have a hard cover copy of EKTIN. (Thank you, John.) Anyone who hasn't read it really needs to. One of the great openning scenes I've ever read, and it just rolls from there.

Did somebody say free shit?

Wow, what a weird and sad story. I gotta figure that St Martin's now has a vested interest in having your first two books in print to back up SWAP (or, actually, LET IT RIDE). I certainly hope it works out that way. My two cents: it was a great read.

Yeah, have the hc so kindly ignore my entry in the contest and let someone else have the joy of reading that one for the first time.

You, Declan Burke, Ray Banks and Allan Guthrie -- I wish I had the money to become a publisher; I'd sign the four of you up in a heartbeat. And let Harcourt eat my dust when you guys take home the awards.

Just keeping the record straight, John... The US edition of my new book, SLAMMER, has just been spotted on bookshelves within the last few days. It's published by HMH (Harcourt). Sad indeed to lose you and Dec as stablemates, but you've found a great US home with one of the savviest young editors around.