The Devil Is In The Lack of Details

Ever since that jerk John Milton wrote Paradise Lost, everybody has had to fight with the idea of the villains being more interesting than the heroes.

In noir, of course, ain’t nobody wearing a white hat. This guy is less bad than that guy, so he’s the hero. Or, as readers, we have a better understanding of this character, so we identify with her better. Or we have seen more background for this person, so we know where he is “coming from” and root for him.

In Allan Guthrie’s Two-Way Split everyone is a bad guy in some sense. But we follow along with Robin, Eddie, Pearce and some others understanding why they make their choices. Sure they’re bad guys, but they’re our bad guys.

In Charlie Huston’s Hank Thompson trilogy, the former baseball player turned bad guy does plenty of nasty things, but he takes care of his neighbor’s cat. So how bad could he be, really? 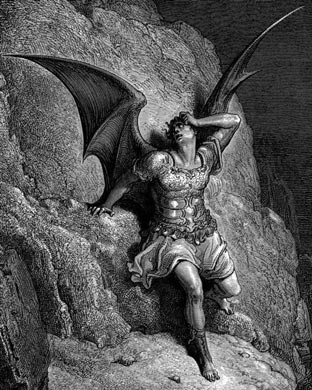 But these aren’t the villains. They’re bad guys. The villains are the ones who keep the main character from getting what he wants or the folks who take something away from her. The villains work as obstacle, as conflict.

In one of the dozen or so James Lee Burke books I’ve read, there’s a villain who drips evil the way my stumbling Uncle Danny drips Jim Beam, in huge, unmanageable stains. The guy gets to Dave Robicheaux’s family, threatening and finally hurting his loved ones. If you’re charting this stuff out at home, this is on the other side of Hank Thompson, Huston’s bad guy who takes care of a cat.

You can rob a bank, but if you stop during the getaway to help an old lady cross the street, you’re a good guy who is doing some bad stuff. If you’re the villain and you kill a couple of tellers in the shoot-out, well, that’s what villains do. But if you move beyond the job into something personal, maybe you see a family photo behind the teller and threaten his newborn child if he doesn’t hand over the cash, then you’re an evil bastard. You’ve crossed a line. Your “badness” isn’t contained to your job. Your badness has extended, like a stain that keeps spreading, the edges that keep creeping to the walls. An evil that threatens to take over. Something beyond our understanding. An evil that is bigger than we can contain.

And I think that’s part of what makes a villain different from a bad guy, that terror we can’t see, that evil we can’t quite hold.

We don’t need to know all the answers to what makes the villain a bad guy. We don’t need to understand him. We need to fear him. The monsters in the movie Alien are scarier when we can’t see them, when they are just teeth in the shadows.

When we understand the devil we can identify with him. And when we can’t understand him, when there’s something dark and twisted and evil that keeps him chasing us through the hallways of our house at three in the morning, all we can do is run.
Posted by Steve Weddle at 3:00 AM

I struggle with "the knowing" all the time. I want to know EVERYthing about Character A or Villain B. At the end of Harry Potter 7, I was frustrated that JK Rowling didn't give me Every, Single Detail about Every Single Character from the end of the adventure to the future she shows us.

But, like you said, we don't need to know everything about a villain. Just be scared of him. It's really more fun. Sometimes, it ruins things. I didn't need "Hannibal Rising" and haven't seen it. In "The Dark Knight," I couldn't care less *how* the Joker became what he is. He is. Period. Nuff said. While I enjoy the live-action Grinch Who Stole Christmas movie, I didn't need all the backstory. Really. Suess said it best: no one quite knows the reason.

In noir, I appreciate the idea of bad and less bad. It seems to be what our time needs. For the guys who wear the white hats, there's always some dirt on the hat. It's what makes characters interesting. On the other hand, it's kind of fun to read about a character (Tarzan, for example) who is purely good. Sure, it's not *as* exciting but sometimes, we just need the white hat to be clean.

I read a review a while back--it may have been of John McFetridge's new book--where the reviewer took the author to task for not telling why the drug dealers had become drug dealers. I had what I thought was a reasonable comeback: who gives a shit? Some people are just bound and determined to be bad. True, some have some motivating event that turned them bad, but most don't. Not to mention that many crooks didn't set out with "criminal" as their career choice, but kind of drifted into it and found they were good at it, much like I did with computers. No reason. I needed a job, and this computer place was hiring entry level people.

Some writers leave too much out, and the characters become cardboard. The opposite, to tell to much, may be honorable in its intent, but just as irritating in execution.

Really, really evil villain- Anton Chigurh from No Country for Old Men. I read the book but didn't see the movie. Too much.

Devil villains- more than one in Shadow of the Wind. Don't want to think about them. Evil plus a whiff of Satan gets me down deep.

Who's haunting you these days???

Scott - Good points. I was thinking of Willy Wonka in the Johnny Depp remake. You learn the reason he became a candy maker is that his father was a dentist and they weren't allowed to have candy. Blech. Same problem with Hannibal, I suspect.

Dana -- Absolutely. I wonder whether the review questioned how the cops became cops. Maybe the thought is that people are automatically really sweet and nice and need something to push them to crime. And we're back to the sugary empty calories of Willy Wonka.

Christina -- I keep meaning to read some more Cormac McCarthy. I started the one where the father and the son are riding horses.