Community at a Writer's Core

When people say writing is a solitary life, it’s probably because those people are awkward dorks.

This weekend, fellow writer Chad Rohrbacher and I took our families into the mountains to pick apples. Despite the cold, windblown weather, this seemed to be the popular idea. Minivans and SUVs twisted up washed-out roads and people stood on look-out walks to take cell phone pictures of empty landscapes. 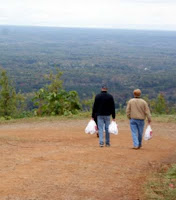 There are many things I’m no good at, probably seventeen or eighteen, at least. One of those things is counting. But I’d estimate roughly seven-hundred-million people were walking around the orchards, wearing their Old Navy fleece and pulling their twins in little red wagons, making videos for Grandma and filling recycled-fiber bags with oddly shaped Fuji apples.

Why would people drive up a mountain and pay for the privilege of picking your own apples? Well, the apples were fantastically good. I had three before we got back to the weigh-in station. (I was a little worried that they were going to figure out how to make me pay for those apples by weighing me, too, and just charge me for however far over 175 pounds I was. Turns out having an apple while you’re picking them is totally acceptable, though eating an apple while you’re in line for the weigh-in is scowled upon.)

The reason folks were doing this was for the experience – the idea of getting back to nature and joining a community of like-minded people on a Saturday afternoon. (I’m sure excellent political arguments have been made about middle-class people doing manual labor for “funsies.” Since those arguments are usually made by middle-class professors looking for tenure, I don’t really see any need to debunk them.)

So all these families descend (um, ascend?) on a mountain, like ugly on my Aunt Bertha and this ties into writing how? Haha. Funny you should ask.
This past weekend mystery writers descended on Indianapolis for the annual Bouchercon conference. Next month mystery writers in another state will converge on a conference. In addition to national groups, mystery writers have state, regional, and local clubs and associations. They have panels at conferences. Meet-ups. Book signings. Blog tours. Wha? You think this is promotion? This doesn’t count? Writing can still be solitary? Bah.

When I write a chapter, I have a handful of fellow writers I can shoot it off to in order to find out what level of stink it has on it. And while they’re reading my chapter or short story, I’ll be reading what they sent me this morning to look at. Do painters do that? “Hey, I bought this canvas and I can’t decide where I should go after I put the orange streak down the middle.” Yeah. Good luck mailing over your sculpture there, art boy. Writers share their work as much as any group I know. From asking for help on early ideas to passing around ARCs, writers use their work to build community, to work together.

And readers are just as active building community. Reviewing books, linking to author interviews, driving two hours across west Texas to a book signing. Sure, when you read it’s just you and book, but you’re part of a community. Just like the writers. Readers pass books on to each other. “You have to read this.” Readers share their favorite books the way writers share their books – with everyone they can. And readers are more and more becoming writers themselves, thanks to Twitter, Facebook, and review blogs.

So that apple orchard on the side of the mountain kinda reminded me of a bookstore, with people strolling around, browsing down the aisles for something tasty (Did I take the metaphor too far? Sorry about that.) with family and friends. A community of like-minded folks.

Then one of them goes home and sits on the back porch, looking out over the sunset and eating an apple while killing off one of the main characters in the new book. Then hitting select, copy, and paste to put that chapter into an email, he sends it off for quick reads to his writer pals, including the one who just went home with $47 worth of apples.

Then the writer sits back to enjoy the rest of his own unbalanced Fuji apple before tossing the jagged core into the woods. You know, now that I think about it, eating an apple is a solitary experience.
Posted by Steve Weddle at 3:00 AM

so weddle, you write that blog all by yourself?

anyhoo, nice description and metaphor -- but couldn't you find a cooler picture than our butts walking down the mountain with 45 pounds of apples?

Unfortunately, writing doesn't have the colon-cleansing capabilities that eating too many apples does.

I dunno, Chris. I've written some stuff which definitely emptied my gastro-tract upon review.

Thanks, guys. A couple of folks have sent me messages asking what a crime writer is doing picking apples on the weekend.

Um, I was tailing this guy who'd fallen behind with his bookie. Turns out he was making bets,trying to make some cash to help out his ailing grandma. They went apple picking to get her some fresh air. So Chad and I had a chat with him and shoved his grammie down the mountain. Yeah, that's why I was there. Then I kicked his dog.

SACRAMENTO—We did it. A virtual convention. And last night was the final piece—the live awards ceremony. And a million moving pieces (mult...