Not Just For Kids Anymore

When I was a kid, my parents didn’t read to me much. I knew about the Cat and the Hat, but I never read it until I was older. I remember sitting in a doctor’s office waiting to go into the examination room and seeing a worn copy of Dr. Seuss’ masterpiece sitting on top of the worn National Geographic’s. I picked up the book, mainly because I had already looked through the National Geographic’s years before on previous visits and because the magazine covers skeeved me out due to the thick sheen of finger grease left from years of being thumbed through by all of the other patients. So I read the book, put it down, and thought to myself: “So that’s what all the hype was about.” The book was cute and I got how it was delightfully different, but it didn’t do anything for me. The only book I could ever remember getting my attention was Where the Wild Things Are. That had monsters, so there was no way a cat wearing a top hat was going to compete with that. I found another Seuss title buried beneath the old magazines and read it just to be sure. One Fish, Two Fish, Red Fish, Blue Fish was even less interesting than the first. I put down the books and was done with picture books, for a while. I figured I just wasn’t a picture book kind of guy.

I am a teacher now and I teach Grade 8. Where I teach, I am responsible for almost every subject, so I work hard to get kids into some good books. I start every year with Ed McBain’s On the Sidewalk Bleeding. Harry Potter it ain’t. There are no wizards or movies about it. It is always something brand new for the kids. McBain wrote it as Evan Hunter and you can find it online. If you haven't read it, take a break and do it now the blog will wait. How often do you get to spend Sunday morning with McBain anymore (Click Here)? Often, this story is the first time kids I teach realize that not all stories have to finish with a happy ending. I segway this story into others like Roald Dahl’s Lamb to the Slaughter which is another dark story (just in case you never read that either Click Here). From there, I show the kids as many things as I can that will make them learn to see books as more than just a school chore. In looking for things to show the class I was guided by another teacher back to picture books. I was sitting through one of those boring Professional Activity Day meetings wishing I was at home like the kids when the presenter began sending around picture books. The passing ended when the books hit me, because I spent the rest of the meeting reading each one before passing it on. These children’s books were not like the one’s I remembered. There were no monsters, or rhymes, they instead dealt with serious social issues. I read a book on homelessness, one on the cultural devastation wrought by Columbus, and another about the dangers of life in a dictatorship.

After the meeting, I arranged to get each book and sought out several more by the same authors. I couldn’t believe someone had decided to stop treating children’s books like something meant only for a toddler’s bedtime and that I had missed the memo. These books used the medium of picture books to explain and explore topics that young children do not usually come into contact with until they are much older. The issues are presented in understandable terms and are usually centered around a young person’s perspective so that they are easily relatable for young audiences. My students have found them more engaging than a rhyming cat in a chapeau every time. 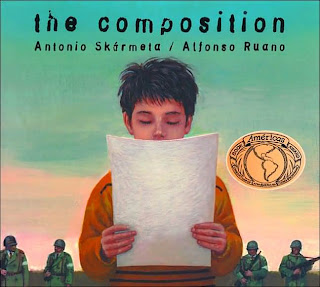 e Composition by Antonio Skarmeta and Alfonso Ruano. The story is intense. It centers around a young boy named Pedro who lives in a time of political upheaval in Latin American country. The military begins to cart off the parents of young children for their opposition to the dictator. The situation even begins to affect all of the children in a nearby school when a General comes to class one day to assign a new piece of homework. The children are tasked with writing a report on everything their parents do at night. The fate of Pedro’s entire family is thrust upon him and he cannot hide or run away. The issues in The Composition are serious, but amazingly they are understood by a lot of young kids.

Books like The Composition stop babying kids and give them a chance to read something challenging and relevant. They also opened my eyes to the serious literary work that has been going on under my nose. So the next time you’re in the local big book chain. Take twenty minutes and cruise the kids section past the Seuss and Madonna. Just be prepared to get stuck there for a while.
Posted by Mike Knowles at 3:00 AM

Good points, Mike. Good to know that children's books don't have to be childish.

Nice to know that writers are out there putting stories together for kids and still managing to respect their intelligence. Kids, especially the age-group you're referring to, seem to have much more ability to deal the the "tragic" and the dark than we give them credit for.

Of course, I'm not sure I'd hand an eighth-grader DARWIN's NIGHTMARE or DIRTY SWEET or THE GOOD SON or WHEN ONE ONE MAN DIES. Best not have them grow up too quickly.

Y'know, i think it would be interesting to put together an anthology of teenage crime fiction.

Nice article Mike. While I still think there is a place for Cat in the Hat for the youngsters, I agree with your points about getting kids to read books with meaning. My 17 year old started reading Harry Potter when he was 5 (well, we read the first one to him, then he took it from there), but quickly advanced to bigger and more challenging books like Crime and Punishment (when he was a preteen). For him the Harry Potter series came along at the perfect time, introducing him to the wonder of books and piquing his curiosity in what else is out there.

I'm a McBain freak, but I'd never read that story. It should be on the lists of every school where there's a chance kids may get into gangs.

THE KILL ZONE blog has a not dissimilar discussion about scholastic reading, and how much emphasis should be placed on the classics, or on things kids might actually read and not think it's a chore. This story would be a good place to look for relevant reading that doesn't fit the "classic" mold, if the guardians of education can be persuaded not to dismiss it as genre, written by yet another dead white guy.

If you are still teaching 8th grade, I hope you now know how to spell segue...