Everything I have written so far has taken place in Hamilton, Ontario. If the last two words are unfamiliar, just know my books are set in Canada. I’ve briefly moved settings to Montreal, or Prince Edward Island, but the bulk of my work is about the city I live in. I write about the city because it’s all I know. But there are some places I really wish I could set a story in.

Recently, on Twitter, someone threw out the name Brent Ghelfi. I checked out the name and found out he’s the writer of the Volk series. The series takes place in modern day Russia and centers around a military operative working both sides of the law. Once I found out the book was set in Russia, I was in no questions asked. There is something so tough about the Russian setting, not the Jason Bourne-esque Russia full of embassies and expensive dacha’s, but the mean streets full of everyday people and everynight lowlife’s. Any crime story about Russia makes me excited like a kid on Christmas because I always know I'm in for something raw and new. As I read Ghelfi, I thought about why I liked the setting of the former Soviet Union so much. I think what it is comes from what the country was. The harsh communist roots bred a system of corruption so deep that every level of society is involved. This kind of corruption makes crime stories possible anywhere. Stories can involve regular people, the mob, political figures, and the army all at once and it never seems implausible. The country is also experiencing a boom in organized crime. Russian gangsters are the new black. They are written as cruel, emotionless, hard cases— they are the perfect bad guy. No one feels bad when you kill off a Russian gangster in a book. Even my mom was cool with it when she read about it in my book. Not even the government in Russia is safe. The politicians with their former KGB and military roots run a system that is corrupt on levels unheard of in the West. In short, there is bad everywhere in Russia. Bad is good when you’re writing crime novels. One other aspect that I really love about Russian crime is the lack of technology. You won’t get a protagonist aided by the latest satellite technology or forensic advancements in a Russian crime story. The old styles of police work and espionage still pop up even though everywhere else it is the twenty-first century. It always feels like the protagonists have less to rely on, so they end up needing to get really dirty to get the job done. I love the hands on approach. It is always more satisfying when something is beaten or coerced out of a person rather than found on the internet.

Case in point from Volk’s Shadow: 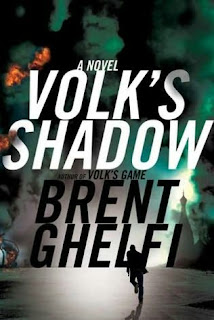 The makeshift command post has been established in the first floor lobby of an office building three blocks away from the one that was bombed. I cross a wide street emptied of traffic. Slam open the steel-and-glass door. A small group huddled around a folding metal table all turn to stare at me.

"Who's in command?" My voice sounds loud even to my own ears.

"Who wants to know?" Tall, thin, and spectacled, he looks like a haughty professor, although too young to be one. I know his kind at a glance. A staffer, privileged from birth by his family's social position in the old Soviet order. His uniform and red beret identify him as a special forces officer of the internal troops of the FSB—the principal successor of the KGB—but his kind can be found throughout Russia's military, political, and bureaucratic elites.

I throw off my overcoat so that he can see my rank on the tunic beneath. He turns his back to me.

"I'll get with you later, Colonel." He spits out the words as though he's trying to rid his mouth of a bad taste.

He whirls to face me, lips twisted into a snarl. "You'll not speak again until I address you. Is that—"

And I am upon him, wrenching him onto the table. It collapses under his weight and the force of the blow. A laptop crashes to the floor with him as he smacks the marble facedown. I plant the heel of my combat boot on the back of his neck.

"Who is second in command?" I say, so softly that everyone in the room leans forward to hear me.

A florid-faced policeman snaps smartly to attention. "I am, sir. Inspector Barokov."

The FSB officer under my boot struggles to rise. Or to reach a gun. I pull my Sig, bend down, and crunch it against the side of his head to knock him out. Then nod to the inspector to go on.

If this happened in an American story, there would be a court marshal and some time in whatever the brig is. In Russia, this doesn’t even slow the story down. How great is that?

Another place I wish I had the knowledge to write about is south of the border. Hard Case Crime had a few books set in Mexico and they are always off the chart fun. Mexico has a lot of the same corruption I like about Russia, but with added bonus of a huge emerging drug cartel with zero fear of law enforcement or the governments of Mexico or the United States. The geographic position of Mexico makes it possible for all kinds of cool smuggling stories and tales of extortion. You can even hit up a tourist angle and do a cool kidnapping story like Gun Work by David Schow. 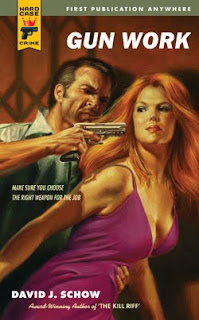 "From the top, Carl," Barney said into his phone in the dark. "Deep breaths. Simple sentences. Subject, object."

"This goddamned phone card," Carl’s voice crackled back at him from one country to another. "You’ve got to get a phone card to use the payphones and half of them don’t work. The time on the cards runs out faster than—"

"You said that already. You said they grabbed Erica. Who-they?"

In Mexico, kidnapping constituted the country’s third biggest industry, after dope and religion.

"But she was abducted."

"What do they want?"

"They said a million."

Barney wiped down his face. Squeezed the bridge of his nose. He didn’t need to click on the nightstand lamp and become a squinting mole. "Why you?"

"Because they think I’m a rich gringo." Carl started breathing more shallowly and rapidly on the other end of the line. "My god, bro, how can I—"

"Rich. Can you cough up seven figures?"

Another beat. Barney frowned. His long-lost friend was wondering whether to lie.

"And you want what from me, exactly? They’ve got the hostage and you’ve got the ransom. So, trade."

"It stinks, amigo. It stinks like underbrush when you probe by fire." He was playing the war-buddy card again. "Probing by fire" was when you cut loose a few rounds into unknown territory. If return fire erupted, you knew the hide was enemy-occupied. It helped to be fast-footed in such circumstances. The suspense was gut-wrenching, and you could smell your courage leaching out in your sweat.

"There’s nobody else I can trust in a shitstorm like this. No good faces. I’ll wind up nose-down in a ditch with my money and Erica gone. I need your help. The kind of help you can’t just buy." Another telltale beat of quiet. "Will you help me?"

I’m not giving away the rest of the story, but Barney does help out and the violence that ensues could never happen in a North American setting.

I think that’s the great thing about these types of settings— they’re like the bizarro world where everything is similar enough to feel at home, but full of differences that make all kinds of new things possible.

I don't have money to travel, but I'm not sure if a vacation to Russia or Mexico would get me the experience I would need to create the kind of story I would like to write. I write about Hamilton because I know the people. I know the customs and the little nuances. I don't know how off the beaten path I would have to get, or how long I would have to stay there to get what I would need to write a good Russian crime story. Plus, if any of the stuff I read in books is true, I'm not sure I'll ever make it back off the beaten path. There's no way I could muster up enough broken Russian to keep me from being shot or ransomed. My fingers would probably end up being Fedexed to my door while the rest of me stays tied to a chair.

For now, while I build up my bank account, my vocabulary, and my nerve, I think I will just keep reading about the underbelly of Russia and Mexico. It’s safe enough from a distance of twelve inches from the page.
Posted by Mike Knowles at 3:00 AM

I'll check out that Ghelfi book, it sounds like fun.

I've been giving thought recently to trying to write about a new location. Mostly i write about the midlands towns that i grew up in, and my voice seems to work there.

Ive been living in Glasgow for three years now, but still anything over about two thousand words set here and i start to feel like i'm faking it.

I think my next mission will be to write a short story of every place i visit, just as an experiement in expanding my toolkit.

Great stuff. I think one of the ideas here is the idea of 'writing the other.' Someone, and I can't remember who, said that he couldn't write about a place until he moved away. I can understand that. By nature, a writer is the outsider, the observer, the person who sits along the wall at the party and listens to the conversations of other people.