Last week I talked about going to literary conferences, conventions and festivals and then on the weekend I was at the Books 2009 Festival in Dublin. I'm still in Dublin, or just outside the city in a beautiful part of the country called Wicklow, as the guest of Declan Burke - these are the rewards of writing for me.

Books 2009 Dublin was pretty much exactly what I was talking about last week. A great place to talk about books, to find new books and for me, to feel like a real writer.

The opening ceremonies to the festival on Thursday featured a reading and short interview with John Banville. I haven't read any of his books yet (I can say "yet" now because I certainly will soon) but I followed the whole kerfuffle with him and Ruth Dudley Edwards (more fun with her later). As expected, the guy was charming and gracious but he was also honest and strightforward - the way I like the books I read to be. He had what I think is a tremendous insight into the writing process when he said;

Writing is not self-expression.

For years I've heard people teaching writing talk about expressing yourself, people taking the "write what you know," too literally to mean the things and events that you know rather than the emotions and about getting your voice right and meaning "your" actual voice. Banville said when he was starting out writing short stories it wasn't until he wrote one that was its own story, removed from him, that he realized, yes, that's right.

On Saturday the conference's crime fiction section started off with a workshop on crime writing by Declan Hughes. At Bouchercon last year Dana King told me that Declan Hughes gave a talk about writing PI stories that was inspirational. His workshop was full of very practical advice based on his experience but yes, it was also inspirational. Especially when he said, "Writing is fun. Well, it's not fun like going to the pub for a pint, or fun like, well, insert your favourite fun activity here ______, but it's fun when it's done." Yeah. A lot of people have told me they'd like to write a book and really what they're saying is that they would like to have written a book. Writing feels good when you're getting it right (though it's very hard to keep that feeling when you finish for the day) and feels awful when it's not working. Declan Hughes makes you feel like it'll be worth it to fight your way till the end.

My panel went very well, I got to meet Stuart Neville, Alan Glynn and Ava McCarthy. The moderator was a novelist and professor of Italian named Cormac Miller who was very good and gave us the questions he was going to ask ahead of time - I wish my professors had done that back when I was in school.

There's a lot of buzz around Stuart's debut novel, The Ghosts of Belfast (in the US - it's called The Twelve in the UK and Ireland and I don't know which title it'll have in Canada) and after Cormac had us read the first page of our books I understand why. A guy by himself in a bar, looking at the ghosts of the people he's killed. If someone was telling me about the book and they said, "And when the ghosts follow him home and scream at him to keep him from falling asleep he says, 'it was worst when the baby started crying,'" I would think there's was a real danger of that book getting too maudlin, too sappy - come on, the baby? But the first two page were so good I could only think, man, if the rest of the book is that good, it'll be fantastic.

Because if there's no danger, what's the point?

In some ways I had the same fears about Alan Glynn's Witerland. Two men with same name (a man and his sister's son) die on the same night. The nephew, a Dublin gang member, is executed in a bar - er, sorry, pub (have to remember where I am) and the uncle in a car accident. But was it an accident?

I'm now 157 pages into the book and thrilled to report the "coincidence" was dealt with early on (for the reader, at least) and the book is excellent. None of the characters are too far behind the curve. Now I feel silly for being worried that the book was going to rely on that coincidence all the way through. This is no one-trick pony.

And the thing about Ava McCarthy's book, The Insider, that I think makes it very cool is that it's a big fat thriller set in Dublin. Computer hacker, insider trading scheme, chases, action - everything you'd expect in a thriller - and with a solid female lead and Dublin.

The final panel was Declan Hughes interviewing John Connolly and Colin Bateman. Unfortunately for people reading this it was mostly a, "You had to be there event." Just to hear John Connolly's rant on Dan Brown (quite the flip-side to Steve's here on Monday ;) and rant on so many other topics and for the sheer joy of Colin Bateman's few, but perfectly timed, words.

It was really the kind of thing that makes going to conferences and festivals and conventions worth it.

At the end of the day we went to a pub (shocking, I know) and I got to hear John COnnelly and Declan Hughes rant some more, but this time they had Ruth Dudley Edwards to keep up with. Some great gossip, there (another good reason to attend a conference) and I also had a chance to talk to Brian McGilloway and I was happy to hear there are more Devlin books on the way.

Oh, and one more thing. Whenever I'm in a crowd I like to blend into the background and not be noticed. Whenever I'm at a comedy club and the person on stage asks questions to the audience, even stuff like, "Anyone from out of town?" I never say anything, I just sit there and hope he doesn't look at me.

And yet, somehow, in Dublin, I ended up in the middle of a street performer's act for half an hour in front of a huge crowd on Grafton Street that ended with the guy laying down on a bed of broken glass and me standing on his chest.

People who know me will think I'm making this up, but I have proof: 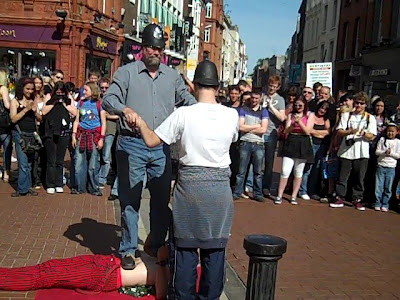 The whole story is on my blog.

Now, if that's not a good enough reason to go to a convention, I can't imagine what is.
Posted by John McFetridge at 12:01 AM

Thanks for the insight. You're always adding things to my TO BE READ pile.

And the post at your blog of the street scene was hilarious.

"Whenever I'm at a comedy club and the person on stage asks questions to the audience, even stuff like, "Anyone from out of town?" I never say anything, I just sit there and hope he doesn't look at me."

This is good to know. If we're ever at a comedy club and that gets asked, I can point to you and say, "He is."

(As my beloved Spousal Equivalent would say, this is probably why i don't have any friends.)

Holy crap! You're on Grafton Street and the sun is shining! Lucky you! I lived in Dublin for three years and I saw the sun maybe 20 days.

Skip the Guinness Brewey but take the Jameson Whisky distillery tour. When they ask for volunteers shoot your arm up! You'll get to taste-test six different kinds of whisky!

Yeah, I was in Ireland for a week and it never rained once - the sun was shining most days.

This climate change must be bad for someone, but it's looking good for Ireland.