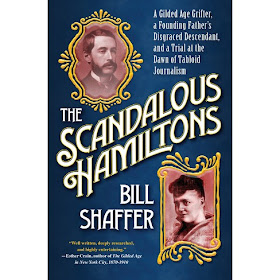 I spoke with Bill Shaffer about his new book, The Scandalous Hamiltons.

Listen to the podcast here.

An Alexander Hamilton heir, a beautiful female con artist, an abandoned baby, and the shocking courtroom drama that was splashed across front pages from coast to coast—this is the fascinating true story behind one of the greatest scandals of the Gilded Age, and the story that gave rise to the sensational tabloid journalism still driving so much of the news cycle in the 21st century.“Fans of Erik Larson–style histories and anyone who just loves a fun, gossipy read will love The Scandalous Hamiltons.”—Apple Books, Best of the Month Selection"Adultery? Check. Attempted murder? Check. Baby-trafficking? Check. These are just a few of the missteps of the woman who rained humiliation onto the House of Hamilton." —Marlene Wagman-Geller, author of Women of Means: Fascinating Biographies of Royals, Heiresses, Eccentrics and Other Poor Little Rich GirlsIt’s a story almost too tawdry to be true—a con woman prostitute who met the descendant of a Founding Father in a brothel, duped him into marriage using an infant purchased from a baby farm, then went to prison for stabbing the couple’s baby nurse—all while in a common-law marriage with another man. The scandal surrounding Evangeline and Robert Ray Hamilton, though little known today, was one of the sensations of the Gilded Age, a sordid, gripping tale involving bigamy, bribery, sex, and violence.When the salacious Hamilton story emerged in during Eva’s trial for the August 1889 stabbing, it commanded unprecedented national and international newspaper coverage thanks to the telegraph and the recently founded Associated Press. For the New York dailies, eager to capture readers through provocative headlines, Ray and Eva were a godsend.As lurid details emerged, the public’s fascination grew—how did a man of Hamilton’s stature become entangled with such an adventuress? Nellie Bly, the world-famous investigative reporter, finagled an exclusive interview with Eva after her conviction. Hamilton’s death under mysterious circumstances, a year after the stabbing, added to the intrigue.Through personal correspondence, court records, and sensational newspaper accounts, The Scandalous Hamiltons explores not only the full, riveting saga of ill-fated Ray and Eva, but the rise of tabloid journalism and celebrity in a story that is both a fascinating slice of pop culture history and a timeless tale of ambition, greed, and obsession.“Historical true crime buffs will be engrossed.” – Publishers Weekly“Shaffer has an appealing writing style and a talent for sneaking up on the reader with each big reveal…Rich period detail.” – Booklist

Listen to the podcast interview here