Last week, I watched the first five episode of Masters of the Universe: Revelation. Kevin Smith served as the showrunner. He’s a (seemingly) beloved member of the geek community who made movies lots of geek boys and girls enjoyed, but the reaction (among some) to the new MOTU (as the cool kids refer to Masters of the Universe) series was, um, over the top?

I had never seen any of Smith’s films until 2019 when I watched them all. Having been introduced to his style of filmmaking and immensely enjoying the banter between Smith and co-host Marc Bernardin on the Fatman Beyond podcast, I was going to give MOTU: Revelation a look. I had never seen anything MOTU in its forty-year life, but I thoroughly enjoyed it.

But that got me thinking about the mystery community and if there were any properties, characters, or franchises that generated that kind of vitriol. Honestly, I could think of few if any. Well, until a month ago.

Two of the biggest reactions that come to mind involves Sherlock Holmes. Back in 2009 when the Robert Downey, Jr. film came out, folks had a few things to say about Downey’s interpretation of the famed detective. As I wrote in my review of the movie, Downey merely went back to the original source material—A Study in Scarlet—to get his inspiration. Don’t blame him. Blame Sir Arthur Conan Doyle for not following up on concepts he originally wrote in 1887.

Cut to ELEMENTARY, the CBS TV show that dared to gender swap Watson. If Jeremy Brett’s version of Holmes is my favorite traditional version of the character, then Johnny Lee Miller’s interpretation is my favorite non-traditional version. And Lucy Liu as Watson more than held her own. In this show, both characters were allowed to grow and evolve, something the original Doyle version didn’t do.

Perhaps the closest in terms of reactions to MOTU is fans of The Shadow.

I’m not sure if you knew this or not but James Patterson has written a new Shadow novel and die-hard fans of the character are losing their minds. Granted, I’ve not read it yet, but fans are chastising Patterson’s choices at just about every turn. I’ll reserve final judgement until I’ve actually read the novel, but I always hang my hat on a standard thought: if The New Thing (which might not be 100% accurate to the original) gets new readers/viewers interested in the Original Thing and go back and read/watch the original, is that a bad thing?

I know of but haven’t read any of the Ace Atkins-penned continuations of the Spencer novels originally written by Robert B. Parker. Still, I can’t remember any blogger or YouTuber going out into the world and bitching about it.

I think, but can’t confirm, that there’s a Hercule Poirot continuation.

There might be more, but I think you get the point. By and large, and to the best of my knowledge, mystery fans don’t have a cow when a new person carries on the legacy of an established property.

No Ruining of Our Respective Childhoods

Well, possibly it’s because many of these beloved characters we discovered are first read as adults, Holmes being the likely exception. There’s no danger of someone like Garnder “ruining our childhoods” by making Bond do something different than original author Ian Fleming. Heck, the movies already did that.

I’m pretty sure mystery fans loved their characters just as much as geek boys and gals love MOTU or Star Wars, so why isn’t there an outcry when an old property is given new life?

I don’t have the answer, but what are your thoughts?

An ancient evil roams the desolate landscape of an America ravaged by nuclear war.

He is the Man with the Scarlet Eye, a malevolent force that feeds on the dark desires of the countless followers he has gathered into his service. His only desire is to find a special child named Swan—and destroy her. But those who would protect the girl are determined to fight for what is left of the world, and their souls.

In a wasteland born of rage, populated by monstrous creatures and marauding armies, the last survivors on earth have been drawn into the final battle between good and evil that will decide the fate of humanity. 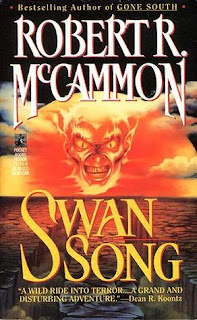 Posted by Steve Weddle at 7:15 AM No comments:

Stories about exchanges or encounters between writers are often fascinating. They can illuminate strongly held but contrasting views on life, art, creativity, political engagement and on and on.  At the moment, I'm reading Glenn Frankel's excellent new book called Shooting Midnight Cowboy, about the making of the 1969 film, and in it, Frankel provides a good deal of information about the life of James Leo Herlihy, the novelist who wrote the book on which the film is based.

Well before he wrote Midnight Cowboy, when he was a college student in the late 1940s, Herlihy met the writer Anais Nin, still obscure herself then but known in certain literary circles. Nin was 44, a good twenty-four years older than Herlihy, and with her reputation and charisma, he was thrilled to develop a friendship with her and to discuss writing.  Frankel describes a conversation they had that I found interesting:

Nin asked him what kind of writer he wanted to be. He cited Upon Sinclair's politically radical, muckraking novel The Jungle as a model.  He wanted to 'write  a book about how cruel we are to one another, a book that tells that in such a way that the whole world will cry.'

And what about you? he asked her in return.  Her answer stunned him: "I want to contribute to the world one fulfilled person -- myself."

Not that both aren't possible and not that writing about topical social issues and problems can't bring internal fulfillment.  For many writers, clearly, it does.  But what this writer meets writer encounter does get at is the tension that often plays out between a writer's need and desire to engage with the world and make statements about its evils and injustices and cruelties and what might be a pull towards a more inner-directed writing that addresses the writer's internal needs, the tensions within the writer's imagination.

Both approaches in isolation or ovemphasized have their dangers. On the one hand, with the "I want to make a statement approach", you can get didacticism or a too heavy moralism or just obviousness about a topic.  On the other hand, with the "let me fulfill myself approach", you run the risk of navel-gazing and becoming so wrapped up in your creation and what it means to you that connection with the reader suffers. At worst, you lose the reader.  Fusing the two approaches, if that's a goal, is a challenge, but when that's achieved, the reader can feel it. The writer then has written about something meaningful to themselves and relevant to the world at large.  That writer has found a form he or she enjoyed creating, that brought pleasure to make. The ardor and pleasure behind the book comes across to the reader who gets into a narrative they find that they want to follow.  That doesn't mean the narrative has to be easy for the reader -- there's nothing wrong with making a reader work a little when dealing with a story -- and it doesn't have to be in any particular genre. But however this challenge is handled, the writer has to, as the saying goes, make his or her obsessions the reader's own, whether those obsessions are focused primarily on the outside world and its topical issues or the writer's internal world, which may have much weirdness in it.

Herlihy and Nin. Writer meets writer, and an interesting contrast of views takes place.  More of these kinds of encounters I come across, if they're interesting enough, I'll post to talk about.

Posted by scott adlerberg at 9:44 AM No comments:

Getting the Knives Out

I’m in the final stages of editing my latest manuscript. It needs to go to my editor this coming week. And this is what it boils down to:

I’ve trimmed and tightened and now it’s down to slicing off the last bits that aren’t absolutely essential to the story. More often than not, these are my favorites. A turn of phrase here, a witty piece of dialogue there. Slice. Backstory pieces that don’t contribute to the plot. Chop. A great joke about the dog. Gone.

This is the most painful part of the process for me, which I suppose is why I leave it until the end. If you’re a writer, how hard is it for you to kill your darlings?