It took only fifty years but I finally listened to Carole King’s Tapestry.

If you read about my regulated reading a few weeks ago, you’ll remember that I’m reading Never a Dull Moment by David Hepworth, his examination about rock music in 1971. As a fun project in 2021, I’m reading the book a chapter at a time, corresponding to a month of 1971. Thus, it’ll take me all year to read this book. Shrug. It’s fun.

Anyway, by reading Hepworth’s book, I have discovered Carole King’s 1971 album, Tapestry. It turns fifty this month, so it’s been fun to read all the retrospectives written about a new-to-me album. By the way, I ended up buying it last weekend after listening to it on YouTube for weeks.

One of those essays is by Bob Lefsetz, the man behind The Lefsetz Letter. He, too, is a new discovery from a few months back. I’ve quite enjoyed his deep dives in music and other things.

Lefsetz starts his post about Tapestry with this observation:

"It was an album for everybody.

That doesn’t happen too often, but when it does, the music business takes a giant leap forward, everybody pays attention, everybody listens, music is talked about, it drives the culture.

Last example? Adele. Her album “21” sold ten times, literally TEN TIMES as much as everything else in the marketplace. It worked for hipsters and as well as casual listeners. It was an alchemy of songs and singing, of passion and precision. “21” was a statement by an artist, not just product to support a system.

Same deal with the Beatles. At first it was a teen phenomenon. Then came “Michelle” and “Yesterday.” No one could deny them as songs.”

Lefsetz goes on to describe the phenomenon of an album for everybody. It is the album owned by the casual listeners, the hipsters, the soccer moms, the dads, the teenagers, the middle-aged, and so on.

After I finished reading Lefsetz’s piece—while listening to Tapestry for the I-don’t-know-how-many-th time, my thoughts turned to books.

What is the book or books everybody owns? We can leave aside the question of whether or not the books are actually read. What is the book read by casual readers, soccer moms, dads, teenagers, the middle-aged, and so on?

Almost a decade ago, I wrote a short post about going to estate sales and seeing the novels of Louis L’amour on the bookshelves. But I specifically pointed out that those books were on the shelves of proto-man caves. If we were only talking about men’s novels, I’d suggest Clive Cussler or Lee Child or Michael Connolly.

But I’m going broader. I would think few teenagers or soccer moms might read the exploits of Jack Reacher. What are the books that appeal to a broad reading audience?

The Da Vinci Code by Dan Brown instantly jumps to mind. It was everywhere in 2003 and it seemed like everyone had read it. I think James Patterson books land in quite a few home libraries, but I cannot think of a single volume of his that fits this criteria. Stephen King is another author who probably has at least one book in many, many homes, but what’s that one book? Nora Roberts is very popular, but I can’t think many guys read her books.

Another candidate is John Grisham’s The Firm. Maybe To Kill a Mockingbird?

So I’m throwing out the question to everyone. What books are for everyone? What book is like Tapestry?

Oh, and yeah, I listened to Tapestry while writing this piece. Man, is that a great album. How in the world did I never hear it until February 2021?

This week, Beau Johnson takes a look at the LOCKDOWN anthology from Polis Books.

In “Lockdown,” 19 of today’s finest suspense, horror, and crime writers explore how humanity reacts to the ultimate pandemic. From New York City to the Mexican border, from the Deep South to the misty shores of Seattle, their characters are fighting for survival against incredible odds. An anthology for our time, showing how the worst crises can lead to the best of us. Proceeds from LOCKDOWN will go to support BINC, the Book Industry Charitable Foundation, as it seeks to help booksellers recover from the devastating COVID-19 crisis. 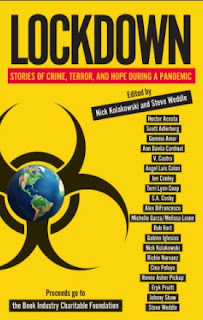 by Scott Adlerberg
I've finished three of the six parts of the new movie by  Adam Curtis, Can't Get You Out of My Head.  It's the British filmmaker's latest collage-like excursion into exactly how the world we live in today has become the way it is, both in the West and in the East (especially China).
Like with all of Curtis' films, there are loads of ideas to chew over.  But so far, the segment that struck me with the greatest force is the one that looks at Jim Garrison, the District Attorney for New Orleans from 1962 to 1973.  He's the guy Kevin Costner played in Oliver Stone's JFK, the one who investigated the John Kennedy assassination and prosecuted New Orleans businessman Clay Shaw (Tommy Lee Jones in the film) in connection with the killing.  A jury heard Garrison's case and returned a verdict of not-guilty for Shaw after less than an hour of deliberation.  Anyone who has seen the movie knows the complexity and vastness of the narrative that Garrison wove around the Kennedy killing, a narrative that begins in one place and takes off into flights of convoluted fantasy, conspiracy theory thinking at its finest (or worst).
Wrong on the facts, Jim Garrison.
And yet...
In his film, Adam Curtis discusses a memo Garrison wrote to his staff while in the midst of his investigations. Curtis explains how Garrison believed that modern democratic government in America was just a facade and that behind this facade was another secret system of power that really controlled the country.  But because this secret system was so hidden and powerful, you could never discover it through normal means.  Garrison wrote a memo to his staff called "Time and Propinquity" to address this situation, and in the memo Garrison explained how you could uncover this secret world.
To quote Curtis on Garrison/s memo: "You didn't bother with meaning or logic because that will always be hidden.  Instead, you looked for patterns, strange coincidences and links that may seem to have no meaning but are actually tell-tale signs on the surface of the hidden system of power underneath."
Curtis pauses in his narration and then says: "This theory was going to have a very powerful effect in the future because it would lead to a profound shift in how many people understood the world.  Because what it said was that in a dark world of hidden power you couldn't expect everything to make sense, that it was pointless to try to understand the meaning of why something happened, because that would always be hidden from you.  What you looked for were the patterns."
Indeed!  I found this fascinating (not to say extremely unusual coming from a city district attorney) because it exemplifies how a person, Garrison, could be so off in the specifics of his theory about a particular case yet lay down an overall theory that would become so prevalent.  Wrong, Garrison, but totally right in a sense.   As Curtis says about the Time and Propinquity theory, "Fragments...That's how people think now.  They make associations and there's no meaning.  That's the world we live in."
It is an illuminating moment, I thought, and I actually stopped the film and went back and replayed the section.  The Time and Propinquity theory.  How that kind of thinking has metastasized.  The obsession with looking for patterns.  A memo from the desk of a New Orleans DA to something common in the world at large, helped, of course, by social media.
So strange really, but, you know, that's where we are.
Posted by scott adlerberg at 11:12 AM No comments:

I do most of my writing at home, so I’m never really limited by having to pack my laptop and various things into a manageable bag in order to take them somewhere. Which means I have some truly massive reference books. 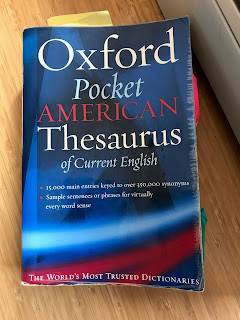 Like the three-pound Chicago Manual of Style—painful in a shoulder bag and painful because, well, it’s the Chicago Manual of Style (yawn). And my trusty Oxford Pocket American Thesaurus, which despite its name measures eight-by-five inches and weighs more than a pound and a half. I know—compared with other Oxford reference books (OED anyone?) my little volume is the equivalent of a pamphlet. But it’s still not exactly something you tuck in your purse.

Then one day I needed a synonym while I was out in the world. So I had to use my phone. And man, is there a lot of crap out there. Half-ass attempts, or ones with a maze of links to get through in order to see a list of words. But then I alighted on www.macmillanthesaurus.com. It’s easy to use (i.e. quick), with a clean interface and few if any ads. And I’ve found that the Macmillan includes more phrases and out-of-left field suggestions. Now I use it all the time. 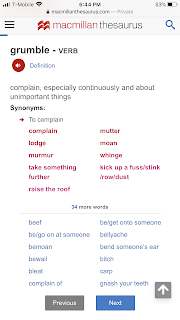 I still love flipping through the Oxford’s physical pages—my eyes landing on entries I wasn’t even looking for, getting sucked down the wonderful rabbit hole of words. But if you need something portable and just as good (if not quite as rabbit-holey), I highly recommend the truly pocket-sized Macmillan online thesaurus.