I think it's common knowledge that a good rule of thumb for reviewing your own work is to read it aloud. I do it all the time. I find easy-to-miss grammar snafus, but I find this method especially good with dialogue. I'll always read the dialogue (with voices!) to hear how it sounds. If I find my mouth adding words or saying the prose differently, I change it on the page.

The reason I bring it up this week is that I completed my index card outline for my next major novel on Thursday morning. It's around 100 scenes or so--some smaller than others. It was kind of an exciting thing to be writing that last index card right as my alarm to signal it was time for me stop working on my new book and get ready for my workday.

Later on Thursday, I cornered--er, asked nicely--the wife if she'd be game to listen to me go through each notecard and tell her the story. She agreed, but initially didn't know what I was asking of her. She much prefers to read the drafts after I've finished them. She's a voracious reader, knows what works and what doesn't, and I rely on her all the time to course correct a story.

All I needed her to do is take the tale on a test drive. Did it make sense? Did the scenes flow nicely. Was there a huge plot gap in the middle of my story? Did she even like it?

We sat at the kitchen table. Initially, I laid out the first forty scenes or so, but swiftly realized it was much better with just the stack right in front of us. I talked over each scene, one by one, taking her through the story.

There's a look she gets when she glazes over and I stopped when I saw that. What was the problem? It was the sub-plots. They seemed extraneous. I reminded her they were sub-plots, but I adjusted on the fly and just kept to the main POV character--since it is her story.

The entire process was incredibly enlightening. I got to tell the story to someone else, serving as a way to get it out of my own head. I took notes along the way, mostly with nips and tucks my wife suggested.

But I came away with the idea that some of the sub-plots likely bogged down the story.

Look, I've written books like this before and I've written books without an outline at all. Each method has its merits and I stand behind both of them. But for this book in particular, I needed to verify that the story structure was solid. It was. Side benefit: I might actually have fewer scenes to write since I'll be proactively cutting some fat.

Email ThisBlogThis!Share to TwitterShare to FacebookShare to Pinterest
Labels: craft of writing


This week, Beau takes a look at the wonderful, amazing, brilliant novel from Attica Locke.

When it comes to law and order, East Texas plays by its own rules--a fact that Darren Mathews, a black Texas Ranger, knows all too well. Deeply ambivalent about growing up black in the lone star state, he was the first in his family to get as far away from Texas as he could. Until duty called him home.

When his allegiance to his roots puts his job in jeopardy, he travels up Highway 59 to the small town of Lark, where two murders--a black lawyer from Chicago and a local white woman--have stirred up a hornet's nest of resentment. Darren must solve the crimes--and save himself in the process--before Lark's long-simmering racial fault lines erupt.

A rural noir suffused with the unique music, color, and nuance of East Texas, Bluebird, Bluebird is an exhilarating, timely novel about the collision of race and justice in America. 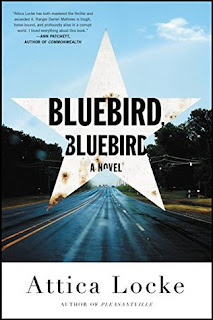 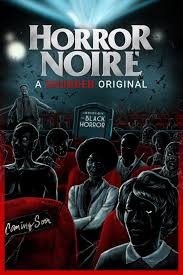 It is the season for horror, so many people's favorite season, and this year I was happy to discover that the documentary Horror Noire,  A History of Black Horror, made in 2019 and which premiered on Shudder (which I don't have), is now playing on Amazon Prime.  It's based on the book of the same title by Robin R. Means Coleman, a book I intend to order pronto having seen the documentary. 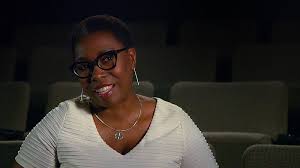 The film is an informative and very entertaining look at its subject, with great clips from film history and a large selection of people discussing the films, starting with Coleman.  The timeline starts with a film not considered horror per se but which, if you're a black person, could easily be considered a horror film, The Birth of a Nation, and runs through Jordan Peele's Get Out and Us.  That's 1915 through 2019, so I won't run through every single film looked at and analyzed.  I'm sure the book goes into much more depth about everything, but the film covers a lot of ground.  I will say I really do want to read the book now just to read what Coleman writes about the original King Kong (racist in certain respects and yet everybody roots for the big black guy at the end and is sad when he gets brutally killed -- a complicated film in my view and for that reason, endlessly fascinating) and also to see what she says about race in the Val Lewton films, in particular Curse of the Cat People (1944), with its black cook/butler character played by Sir Lancelot, a Trinidadian, and I Walked with a Zombie (1943), the Jacques Tourneur masterpiece which gets a fleeting and strictly visual reference in the documentary.  As for George Romero's  Night of the Living Dead, which every horror film fan knows marked a decisive turning point in racial representation in horror movies, that gets its deserved due:

It's remarkable the impact this film had on so many people watching it at the time, black people I'm talking about, and a number of those people, future actors like Tony Todd and Ken Foree and Keith David and Rachel True, explain in Horror Noire exactly what that impact was.

I should add that I never get tired of hearing the story about how Duane Jones' character was not written as black, but that he just happened to be the best actor who showed up on the day George Romero was doing auditions for the role.

If you want a list of Night of the Living Dead and after black horror films to watch this Halloween season (or anytime), the inimitable Gabino Iglesias has just put together a good one over at The Line Up: https://the-line-up.com/black-horror-movies

Best of all, the doc mentions a couple of films I had missed somehow but that looked intriguing, and so I sought them both out quickly.  There's nothing better than a film doc that gives you exciting recommendations. 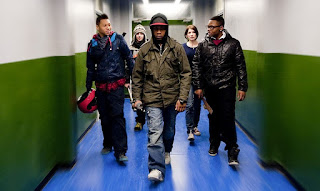 British made, this sci-fi horror comedy stars John Boyega (later to go on to Star Wars films fame) and Jodie Whittaker (later to go on to fame as the first female Dr. Who).  I have no idea how I missed this film for all these years, but it's an absolute lark.  The writer and director is Joe Cornish, in a most impressive debut.  Vicious, hairy alien invaders attack a council estate in London, and a teenage street gang, with leader Boyega, wind up being the block's main defenders.  The gang, in a way that's plausible, is made up of kids of varying shades of color -- class is what unites them more than race divides them -- and the police are the enemy as much as the invading aliens.  Whittaker plays a woman the gang first mugs, but that's before they find out she too lives in the block and that they may need her help.  Action mixes with scares mixes with comedy mixes with social commentary in just about perfect balance.

Yes, as Horror Noire suggests, black representation in horror films is evolving, and evolving well, and this is one example. 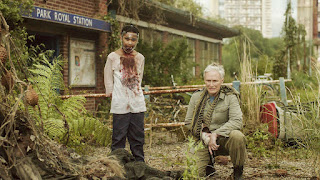 Another British film. This one is a post-apocalyptic story, about a time after a fungal disease has hit humanity and turned people into something akin to zombies.  The mood is somber, but the story is shot through with flashes of dark humor.  You have the feral zombie-like creatures and scientists and the military and a school teacher who plays an important role, but at the center of it all, the character on which the plot hinges, is a strange little girl, a mutant creature herself of sorts, and this girl happens to be black.
As Horror Noire points out, the story was first a book, and in the book, this girl's character was white.  But as happened with Night of the Living Dead, the best person to show up and audition for the part happened to be black -- Sennia Nanua. She was 13 at the time of filming.
To quote Tananarive Due, talking about the film in Horror Noire: It "creates such a difference in the film, to have this black child...This is a sharper social commentary even maybe than he [writer Mike Carey] had intended.  To see a story about a character, a black girl, who faces some insurmountable odds where it seems impossible but you come up with plans and you execute your plans.  This is the stuff that helps us get through life."
Horror films help me get through life, and Horror Noire, Attack the Block, and The Girl with All the Gifts have all done their part quite well in that regard.