It’s not often when the day job and the fiction job intersect, but they did this week.

On the day job front, we had our weekly team meeting yesterday. We’ve got a team of about 25 folks and, ever since 16 March, we’ve been working from home. Fridays are our Zoom calls and we get to see each other’s faces and enjoy an hour of camaraderie.

Yesterday, the grandboss asked how we were doing. And not in a flippant way, but an honest deep dive into how we were coping with the new paradigm of remote working. How were we feeling? How are we getting along with our families? The discussion was good with a few of my team members relating the sameness of our day-to-day lives. One of us commented that she sometimes realized that she needed to just get up out of her chair and walk outside to break up the monotony of her home office.

On the internet and Facebook this week, a few of my fellow writers voiced their frustration with the inability to write ever since the Coronavirus descended over all of us. When we’re all stuck at home with few prospects of getting out to typical places like movie theaters, theme parks, or seemingly every other summer tradition, how the heck can we harness the creativity to write?

I can’t answer these questions, but I can answer them with techniques I use that gets me through each day and each week.

Some of y’all will read this and chuckle. You may even give me a hard time. Don’t worry about it: my family gives me a hard time about it, too, but I still carry on.

On the creative side of things, I hold one rule steadfast: write first thing in the morning. No internet. No email. Nothing other than a cup of coffee, a Bible reading, and the immediate opening of the laptop to work on a story. For the past month, it’s been edits and revision to my next book. Soon it’ll be a return to new stories, but, above all else, I carve out the time to be creative when the world is still dark and I’m the only one in the house awake. It was a routine I needed to create, but now that I have, it’s one of my favorite parts of the day.

This routine paid for itself on Monday of this week when, after I had a productive session, I logged into my bank to pay bills and discovered one of our checks had been stolen and forged. Yes, money had also been stolen. It’s resolved now, but the point is this: had I not already done my creative work, I did not have the mindset to be creative after that discovery. So, write in the morning before the day gets to you.

How good is a tuna fish sandwich? How valuable is movie night? How do these things relate to each other?

But ever since I started working from home, I limit the traditional tuna fish sandwich to my Friday lunches. Why? To build anticipation. I’ll admit I look forward to lunches everyday because not only does my entire family of three eat together, but my wife and I play three games each of backgammon and Yahtzee. But I only eat tuna fish sandwiches on Fridays. Now, my family gently ribs me about this, but I can’t tell you how good that tuna sandwich tastes after a week of anticipation. Yesterday’s sandwich was particularly good. It’s something I look forward to all week long.

Ditto the Friday Night Movies. In the summer of 2020 when Covid has robbed us of a typical summer movie blockbuster season, I invented one. I’ve been revisiting summer movies from the past with even-numbered anniversaries (i.e., years ending in 0 or 5) and it’s been fun. But my point is that Fridays are movie nights. The other six days, sure we can watch a movie (we rarely do; the wife and I watch TV shows every night), but the special day is Friday.

Just like the tuna fish sandwich, I look forward to movie nights all week long. I build the anticipation, and that makes the sometimes monotonous days go by faster. And it makes Fridays all the more special.

Yes, there are times when the wife makes tuna fish on a Tuesday and I’ll opt out. Yeah, really. It’s to keep those Friday lunches special. It’s to build anticipation.

So that’s a glimpse into how I’m coping with working from home and maintaining my creativity.

How are you doing?

Beau looks at MAKE ME

This week, Beau take a look at MAKE ME, from Andrew Grant's older brother. 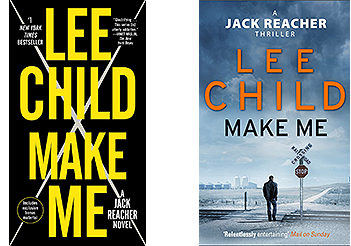 Posted by Steve Weddle at 8:30 PM No comments:

I'll read Zadie Smith on any subject, and when I found out that she wrote a book of essays about the pandemic and the experience of lockdown and the anxious mood we're all living through, I bought it at once.  It's a slim volume, and as she says, the pieces in it "are above all personal essays: small by definition, short by necessity".  The Foreward is dated May 31, 2020. 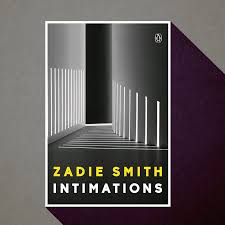 From reading Marcus Aurelius' meditations, Smith writes that she "did come out with two invaluable intimations.  Talking to yourself can be useful.  And writing means being overheard".  And one gets the sense throughout these essays that you are inside Smith's mind as she explores her thoughts and ideas, asks questions of herself, observes with great acuity and humor, the people and conditions around her. We catch her in New York City, where she lives and teaches, as she is just about to leave with her family to go stay temporarily upstate before she will fly back to the city she's from, London.
In "Peonies", Smith discusses writing and its relation to the messiness of life: "Writing is routinely described as 'creative' -- this has never struck me as the correct word.  Planting tulips is creative.  To plant a bulb (I imagine, I've never done it) is to participate in some small way in the cyclic miracle of creation.  Writing is control.  The part of the university in which I teach should properly be called the Controlling Experience Department."
"Something to Do" gets into something so many have pondered and adapted to during the pandemic -- how to fill the time.  She brings up the age-old and overly asked question "Why Write" and says, at bottom and notwithstanding the "convoluted" and "self-regarding" reasons writers often give in answer to this question, it is because "it's something to do".  How utilitarian is art in a world in need of so much social and political change?  "The people sometimes demand change.  They almost never demand art." The stark difference in how writing relates to time and how work relates to time (and, in particular, work done by essential workers during the pandemic) gets a going over here.
"Suffering Like Mel Gibson" is a fascinating essay, in which Smith looks at the peculiar way people relate to suffering in a time of mass suffering. In this time when so much conversation is about "privilege", Smith points out the similarities between privilege and suffering.  "They both manifest as bubbles, containing a person and distorting their vision."  In a time when people of "privilege" often preface comments about their own discomforts and suffering by reminding others that their suffering is tiny compared to those lacking privilege and suffering greatly, Smith brings up the example of "a young woman of only seventeen who had killed herself three weeks into lockdown because she 'couldn't go out and see her friends'."  To belittle in any way this act by the young woman may be missing the point of what suffering is and actually does.  When it comes, as it does on certain days for all of us, it is as if "precisely designed to destroy you and only you".  Remembering this may be a way of being more tolerant when hearing what others consider pain.
I could go on with the quotes -- and there's a temptation to do so because they are so good -- but I won't.  Why give everything away?  I will say that I loved the "Screengrabs" section, in which Smith presents brief vignettes of people she interacted with in New York just before and during the lockdown -- the Asian guy she goes to for quick massages, the "rent-controlled' old woman from her neighborhood who surprises Smith with something she says, the young IT guy from her university who she encounters floating on his hoverboard.  And then there's "Postscript: Contempt As a Virus", which alludes to the George Floyd incident and asks whether in our discourse we should finally drop the word "hate" and replace it with something that may be more accurate: "contempt".  This is the darkest essay of the bunch, the one most anguished and pessimistic.
Zadie Smith always presents more questions than she does certitudes, one thing I love most about her writing.  She is level-headed where countless others rant.  She doesn't present a thesis or an ideology.  Dare I use what almost seems an outdated word and say she approaches things as a "humanist", drawing from a variety of sources and disciplines.  Actually, I'm pretty sure I may that word since in her book of essays, Feel Free, she describes herself as a "sentimental humanist".  With her brilliance comes open-mindedness and self-criticism and self-doubt, which all somehow seem like rarer and rarer qualities these days.
Smith herself says there will be much written in years to come about the pandemic period, and we all know there will be much written about it, but in the meantime, above and beyond all the journalistic pieces one can read about our current predicament, Intimations is absolutely worth picking up.  And you can read it in an hour or two.
Posted by scott adlerberg at 9:29 AM No comments: 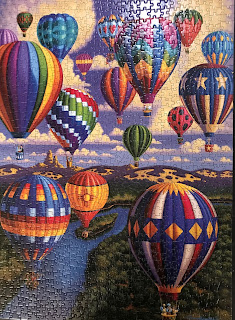 A while back I wrote about the power of rote work. I was building a brick planter in the yard and it became a meditative assignment that helped my mind to wander in directions that benefited my writing.
Lately (and by that I mean since mid-March, when—you know—stuff happened) I’ve needed something that will work twofold. First, just like before, I need a task that’s engaging enough to use part of my brain but not all. I’m still writing a book, and I still have plot points that need working out in that free space my mind get when doing the right level of task.
Second, though, I needed something to do. In the house. All the time. And since pacing the floors was starting to freak the dogs out, I turned to something I hadn’t done much in years. It’s something quite a few of you mentioned in response to my question with last year’s post.
What do you do to keep yourself occupied just enough to let your mind roam free? And use (in today’s Covid world) to keep from going crazy?
Puzzles. Lots of them. And I’m not the only one. Sales have gone through the roof since the pandemic started. I pulled out my old ones and got some new ones. An order I placed three months ago is set to arrive this week. I’m very excited. So are the dogs. They’re tired of the pacing.
Posted by Claire Booth at 3:00 AM No comments: