Prodigal Son: Come for the Premise, Stay for the Twists

by
Scott D. Parker
I had seen the promos for Fox’s PRODIGAL SON back in 2019 and my eyes slid off it. “What if Hannibal Lector had a son and they solved mysteries together?” Wasn’t interested.

A few weeks ago, with my wife’s urging, we gave it a try. I am converted.

It is Malcolm’s father who is the serial killer known as The Surgeon, and for good reason: he is renowned surgeon Dr. Martin Whitly. Rouding out the main cast is Malcolm’s mother, Jessica (Bellamy Young) and his sister, Ainsley (Halston Sage).

The pilot centers on a copycat killer who is using The Surgeon’s MO, so Malcolm is brought in. As a kid, Malcolm was the one who exposed his father, leading to his arrest and imprisonment. Lt. Arroyo was there and has taken a fatherly interest in Malcolm ever since.

This is your typical killer-of-the-week type of show, but it is the characters who help lift this show above the mundane. Despite my initial reticence, you might have thought the premise alone would have hooked me, but I’m not a huge fan of serial killer stories. Still the dynamics of Malcolm’s character make it pretty interesting. With a title like PRODIGAL SON and Malcolm’s own mental issues, there’s a strong chord throughout the show asking the simple question: Is Malcolm like his father? Could the younger Whitly succumb just like his father?

The “Is he or is he not a killer?” is a nice twist on the traditional “Will they or won’t they?” question we ask of shows like CASTLE. Speaking of one of my all-time favorite shows, the pilot is very similar to to CASTLE’s pilot. Shrug.

There is also the question revolving around Malcolm’s continued flashbacks to one night, when he was a child, and saw a woman in a chest. Was she a victim? Who was she? And what happened to her?

Even if a premise hooks you, it is often the characters who compel you to stay. Here, despite the guardrails of a network television show, the characters are pretty darn good. Malcolm’s great and his mind trips are, well, a trip. His relationships with the various members of his family are dramatic if not a little too dramatic. When he visits his dad, they’re always very formal, with the son referring to his dad as “Dr. Whitly.” But it’s really neat to see the progression of their relationship as the 20-episode first season goes on.

Speaking of The Surgeon, Michael Sheen is having a blast. He knows he’s often the comedic relief and he plays it up. It’s a little jarring at first to see this serial killer be funny and you laugh at his comments, but Sheen does a fine job. Know what else he’s good at? The sudden shift from funny to dangerous, sometimes at the blink of an eye. It is in those moments when you go, “Oh, right, he’s killed twentysomething people.”

Phillips is solid as a rock. He is even-keeled who knows he has to go by the book, but also realizes “by the book” doesn’t apply to Malcolm. This is an “eccentric detective with cops” show after all. He really cares for Malcolm and does his best to keep the young man out of as much trouble as he can, not always successfully.

Like most shows nowadays, there is the crime-of-the-week ones and the season-long story arc. Both are satisfying but there are bumps along the road. Highlights include one in which Malcolm wakes to find himself chained inside a cellar (episode 11), the pilot (for setting everything in motion and hooking me), the one with a former cop who worked The Surgeon’s case (episode 10), and the last trio of episodes. I can’t think of a single episode that was sub-par, and many were quite entertaining.

If given the premise and the central questions I listed above, I’m guessing you’d form your own opinions on what might happen during the season. Trust me: I had them, too. But creators Chris Fedak and Sam Sklaver know what you’re thinking and deliver something different. It’s nice to say that some of the questions are resolved while others just make you anticipate season 2 that much more.

I thoroughly enjoyed season 1 of PRODIGAL SON and would certainly recommend. I know I’m eagerly waiting for season 2. 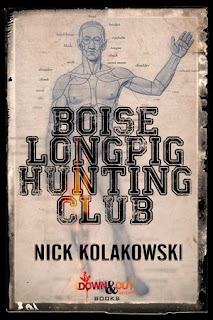 “A bounty hunter, his underworld criminal sister, and a dead body stuffed in a gun safe. What could possibly go wrong? In Boise Longpig Hunting Club, Nick Kolakowski unleashes a sordid and delightfully twisted tale of double crosses, revenge, and good ol’ redneck justice. Like the bastard child of Joe Lansdale

Posted by Steve Weddle at 2:00 AM No comments:

I started watching Bosch season 6 the other night, and I'm enjoying it as I've enjoyed every season previously.  By now we know the major characters, and the season can just kick off without exposition, throwing you right into the middle of a number of different and engrossing storylines.  Bosch remains as solid a police procedural show as there is. 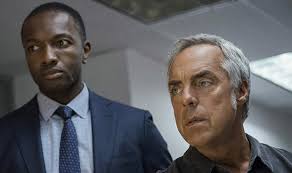 As I take in the episodes, though, I'm quite aware that I'm watching a series that is before the George Floyd killing and all the recent calls to defund and reform the police.  This is to take absolutely nothing away from the show, which, again, over the years, has become one of my favorites.  All crime novelists should get the kind of adaptations, on film or TV, that Michael Connelly has gotten with Bosch.  And this season's storyline, from what I've seen so far, involves sovereign citizens, both white and black, who are conspiracy theory types with a huge mistrust and hatred of the federal government and the "deep state".  There's no question of the material not being relevant, in tune with the times.

There's something odd, however.  And this is hardly an oddness limited to Bosch.  But is there any fiction that has it both ways like crime fiction does?  I'll explain.  Crime fiction of a particular type in effect prides itself on its so-called realism, its ability to look without blinking at the darkest of human darkness.  Crime writers often all but say that they're just trying to "keep it real".  If there are words more overused when describing crime fiction than "gritty" and "grittiness" -- words used as praise by the way -- than I don't know what they are. This goes for police procedurals as well as for works you'd categorize without question as "noir".  But in countless series, in print and on television, series of which precious few are as good as Bosch, you get as your characters these total pros who represent a fairly idealized kind of realism.  I mean, the investigators in these works are more realistic, say, than Hercule Poirot or the cozy sleuths of the world, but they stand out, quite often, for having a measure of exceptionalism.  Damn, if only every cop was Bosch or Jerry Edgar.  If only every metropolitan police chief was like Lance Reddick's Irving. Now there's nothing wrong with any of this; people go to fiction to spend time with characters who are "real" enough to be relatable but still have something beyond the ordinary about them.

But in order to grapple with what's "really" going on (and by that I don't mean every single police officer in existence is racist or a militaristic thug), I would imagine that people who write these sort of stories are going to have to show more of a different side of law enforcement in the post-George Floyd world.  Or show us more of the tension, if there is any, between those in law enforcement who aren't racist and on the thuggish side and those who are.  Or show us how a cop who may have started out one way, with the best intentions, may get warped by years working in a particular job, with its hazards and pressures and organizational demands.  And what about when the cops, pissed off by politicians, do a work slow-down, and the ever-present influence of other cops who don't have the best intentions?  Police will always solve crimes and a well-told crime tale will always be interesting, but there's so much else going on now in connection with cops and their place in our world that seems worthy of deep exploration. For starters, I would think the George Floyd incident, and by extension, the many horrible incidents similar to it, and the police protest movement and the variety of characters participating, however seriously, in that movement, should provide writers with a ton of stuff to ponder and write about in their procedurals.

I don't know.  These are just a few thoughts that popped into my head as I was watching the new season of Bosch.

But I do wonder: how "realistically" will crime writers grapple with what is going on right now?  I guess as readers we'll find out.