Year of an Indie Writer: Week 21

Boy are there a ton of anniversaries this week.

Indiana Jones and the Last Crusade's 30th anniversary was yesterday. Same thing: want to re-watch it and review it. This movie kicks of the Summer of 1989 at 30 series that'll run throughout the summer as I re-watch and revisit the incredible films of 1989.

Today is forty years since Alien was released.

Lots of fun to experience these things again and, in some cases, share them with the family for the first time.


Same one: Blockbuster. The last of the six episodes dropped on Tuesday and it is incredible. I updated the review I wrote when I first heard twice, once to include Episode 5 and again for Episode 6. It is one of my favorite things of 2019. I listened to the last episode on Tuesday morning on the way to work and prompted donated money when I got there. Give it a listen and see what you think.

Later, when I tweeted how much I loved it, the folks a Blockbuster picked it up and included none other than Mark Hamill. That moment of thrill I experienced when I thought Hamill might actually read something I wrote was fantastic. He liked my separate tweet about it.

TV Show of the Week


Elementary returned for its last 13-episode season. I have loved this show from day one. If we can agree that Jeremy Brett is the epitome of the traditional Sherlock Holmes, then Johnny Lee Miller's Holmes is my favorite non-traditional version. He has been allowed to have Sherlock grow over these past seven years. That's made all the difference. I will sincerely miss this show when it goes for its final bow. (see what I did there?)


Monday marks the opening of Summer 2019. Labor Day is 97 days later. This is perhaps my favorite writing time because of the clear bookends.

What are you going to write this summer?

I have to finish the proofing and editing for the fourth Calvin Carter story, Brides of Death, but I aim to try something new. Something different. I don't know what it is yet, but I intend to have fun writing.


Lest we forget, here in the United States, Monday is Memorial Day, and it is dedicated to all the soldiers over our history who have given their last full measure of devotion to our country. They will forever have our gratitude.
Posted by Scott D. Parker at 1:00 AM No comments:

The raisins pod, in case you missed it 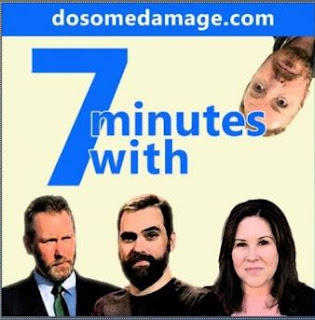 Welcome to Season 2 of the "7 Minutes With" podcast, brought to you by DoSomeDamage.com, with your host Steve Weddle.

This is episode 4 of the second season.

Holly West->
State of the Union
Dead to Me
Cook this: joythebaker.com/2015/09/beef-ench…ives-and-raisins/

The Books That Made Me - Part 1