The One in the Drawer

Someone once said that every writer should put their first novel in the drawer and never show it to anyone. I have three novels in that drawer no one’s ever going to see (and a bunch of screenplays, but I look at the spec screenplay stage of my life as a kind of ‘blackout period’ where I wasn’t really thinking, like a ten year long bender or drug-addicted haze or my first marriage).

I think I learned from those early tries at novel writing, though, and it was a different lesson each time.

In the early 80’s I was going to Concordia University, taking night classes in English Lit and creative writing and working in a warehouse during the day. The classes were all very literary, full of classics and lots of debates about literary theory.

But in my own time I was reading Ian Flemming and Robert Ludlum and Gregory MacDonald.

And there was a rumour in my hometown of Greenfield Park that a writer named Philippe Van Rjndt, who wrote Ludlumesque thrillers with titles like The Tetramachus Collection, The Trial of Adolph Hitler and Last Message to Berlin was really Oleg Michaelchuck. 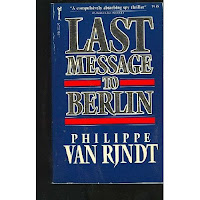 I knew Oleg, he was a few years older than I was, but I’d been the bat boy for the baseball team he played catcher for. He was a regular guy, we went to the same high school. And he had novels published?


So I figured maybe I could do that. I wrote a kind of combination spy thriller-private eye novel. It was about an RCMP officer who’d been fired (of course, he was set-up by higher-ranking bad cops) and who gets hired to spy on a Russian embassy employee by a mysterious older guy. To be honest, I forget a lot of the details, I just remember that the big surprise ending is our hero ex-cop thinks he’s working to help catch a Russian spy but he’s actually working for a Russian spy (the mysterious older guy) and he helps prove the embassy employee is really a double agent working for the Americans. Oh the irony.

Not a good book.

Luckily General Publishing, the Canadian mass market paperback company that published Philippe Van Rjndt went out of business before I could embarrass myself sending them my manuscript and no one else in Canada was publishing genre. (I guess this was the beginning of my luck with publishers. If only I’d known)

So then I decided to write a straight-ahead private eye novel. I’d started reading all the Robert B. Parker Spenser novels and he made it look so easy.

Again I had an ex-cop (not fired this time, he was laid off due to budget cuts, we had a big recession in the 80’s, ask your parents) and the book was full of intrigue and double crosses and lots of beer and eating in restaurants.

This time I got as far as sending out query letters to agents and a couple asked to see the whole manuscript. Oh happy days. Of course they passed once they’d read it, saying that it wasn’t hardboiled enough to be a paperback and not literate enough to be a hardcover. (I wonder what they would have said it lacked to become an e-book?)

Then began my “lost weekend” of screenplay spec writing. The less said about that the better.

And then one more book for the drawer, a police procedural and this time the cop got to keep his job. I was reading a lot of Ian Rankin at this point so I created a Toronto cop named Winston Abernathy and gave him a very dark case. A young couple – very early twenties – are at the beach in Toronto and their two and a half year old daughter goes missing. They only took their eyes off her for a second. The year before two teenagers drowned at the same beach (that’s true) so the lifeguards get right to work. No sign of the little girl.

Then someone who was filming his girlfriend (in a solo sexual act in their car in the parking lot) for their website sees in the corner of the frame a guy dragging a little girl into a van and driving away. It’s fuzzy and in the background of the shot, but it's enough to get everyone on it (every cop wanted to check the video). Winston Abernathy, lone wolf as all detectives in novels are, is given the job of babysitting the couple while the rest of the cops go out looking for the kidnapper.

Right from the start Abernathy knows something is wrong with the story and by the end of the book he gets to the truth – in a spur of the moment act of desperation and frustration the father held the daughter underwater. When no one around him noticed he just kept holding her until she was limp and he let go. Just like the teenagers the year before, the body was pulled under into the depths of Lake Ontario. The young parents had no plan, no idea what was going to happen and when it became a missing person they just went with it.

Dark? Oh yeah. Depressing? Too much even for me. Into the drawer.

So I tried one more time and came up with Dirty Sweet.

I think the three books in the drawer taught me the most valuable writing lesson there is – I stopped trying to wite a book I thought would sell and started writing the book I wanted to read.

So, sometimes the “one in the drawer” is three in the drawer. And some people publish the first thing they write. I hate those people.

But most imporantly, write to please yourself.
John McFetridge at 12:01 AM
Share