The Literary James Bond or My Contribution to Podcast #4 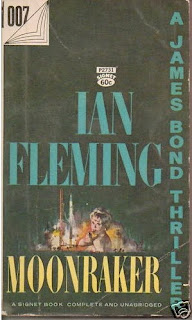 Last weekend, I couldn’t join my fellow DSDers in the fourth podcast. But I, like every reader here (hint, hint) have listened to it. Aside from the flat-out fun of hearing English being spoken in three different accents, I enjoyed the talk that Jay, Russell, and Dave had. They talked about Bon Jovi (yeah, really), Jay’s favorite comics, and other things. What struck me was their discussion about James Bond movies. I’d have liked to put in my two cents then so, guess what? I get to do it now.

I’m a child of the 1970s so Roger Moore was my first Bond. The Spy Who Loved Me was my first 007 movie. Two years later, I had no problem at all with James Bond Meets Star Wars (aka Moonraker). I went back and watched the Sean Connery movies and love them quite a bit. I was one who liked Timothy Dalton (especially in The Living Daylights) and cheered when Pierce Brosnan finally got the gig in 1995 that he wanted in the 1980s (note: I’m glad he waited). And I absolutely loved Casino Royale and Daniel Craig’s portrayal of 007.

As I’ve aged, there’s been a gradual change in the type of Bond movie I enjoy. Originally, with TSWLM and MR and the middle Connery films and the latter Brosnan entries, I loved the megalomaniacal villain out for world domination. One day, however, I stopped liking those kinds of stories in favor of the smaller scale Bond movie. I’m talking From Russia With Love and For Your Eyes Only primarily, but Casino Royale can slide into this category. Heck, the two Dalton films can, too. In FRWL, Bond wasn’t out to stop a giant villain. He needed the SMERSH decoder device. Get it and Tatiana back to London. Period. In FYEO, Bond needed to obtain the stolen ATAC device, part of the British nuclear codes (IIRC). Simple tasks. And believable.

That’s how the books Ian Fleming wrote are. Believable within reason. Well, okay, let me state something for the record: I haven’t read all of of the books. I’m reading them, in published order, about one a year for the past five years. Thus, I’m able to spend time with the books and get a real sense of what the literary Bond is like. Needless to say, he ain’t like the movies.

Let’s look at the order of the first five films: Dr. No, From Russia With Love, Goldfinger, Thunderball, You Only Live Twice. Think about those for a moment and get them in your head and remember how they flow together. Okay, here’s the first five books: Casino Royale, Live and Let Die, Moonraker, Diamonds are Forever, From Russia With Love. Think about those films and get those in your head. Yeah, I get the same idea: that’s just wrong.

The movie versions of CR and FRWL have many similarities with their novel inspirations (CR less so since it was an update; but the famous torture sequence in the movie was in the book). LALD has none of the blaxploitation aspects the film had. Mr. Big was a dude in Harlem, part of SMERSH, yes, but still just a drug dealer. MR is vastly different that the movie and is very satisfying if you’d like to know about Bond’s home life. The entire first third has Bond in the office, at home, getting dressed, and outsmarting Hugo Drax...at cards. DAR has a few things (horse racing; old western town; Bond on a push rail car) that would have been laughed at in 1971 when the movie version was released. FRWL is interesting since Bond doesn't even show up in his own book until chapter 5. And, in the end, Rose Klebb actually poisons 007 with her shoe/knife. Connery would never allow that.

The books are not spectacularly written. They’re stiff at times with some labored structure. But they are thoroughly enjoyable. Since the movie James Bond is so ingrained in our pop culture, the literary James Bond lives in an alternate universe. What’s best about them is that the Fleming novels stop with his death in 1964. What remains is a series of novels completely of its time: the Cold War, back when you knew who the bad guys were. As the movies (and subsequent books) marched forward in time, they lost some of their charm, getting wrapped up in the "new." Some of the John Gardner novels are pretty good, chiefly when they reference the original Fleming novels. Same with the Raymond Benson novels. Sebastian Faulks’s 2008 contribution, Devil May Care, has two distinctions. One, it’s a direct sequel to the last Fleming novel, 1967's The Man With the Golden Gun (again, check that with you memory of the movie order). Two, to date, it’s the last adult Bond novel.

This little post is but the merest glimpse at the vast array of thrills awaiting you if you crack open the Fleming novels. I have my parents’ 1960s paperbacks (like the MR photo above). To be honest, it’s made me want to get on with the six book, Dr. No (first movie).

What about you? Have you read any of the Bond books, the original Flemings or any of the others? If so, what are your favorites?
Scott D. Parker at 1:00 AM
Share