Kelby Losack is the author of "The Way We Came In" (2018) and "Heathenish" (2017), both published by Broken River Books. I wrote that "Heathenish" had the "the clarity and importance of a dream forgotten" and in my review of "The Way We Came In" is "sharp, descriptive and beautiful". You can buy the books directly from the author or from Amazon. Let's go on with the interview.


David: Congratulations on the recent Broken River Books publication of “The Way We Came In.” Though there are crimes occurring in “The Way We Came In”, I wouldn’t consider it solely crime fiction. Could you tell the readers something about your new book? 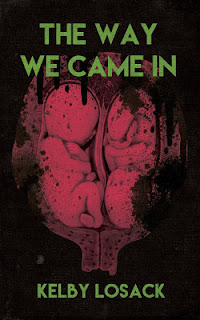 Kelby: It’s definitely not crime fiction in the way Raymond Chandler’s or even Frank Bill’s novels are crime fiction. I call it hoodrat noir when I’m trying to define it, though the “noir” part is mostly thrown in there because it sounds cool. I don’t think of my work as dark at all. I actually approached "The Way We Came In" as a comedy when I started writing it. It’s about twin brothers – one just released from prison – trying to settle a debt with their landlord to avoid being evicted.

I take back what I said about approaching it as a comedy. When I first first started this one, the idea was it would be a spiritual letter to the Sean character in Heathenish, who is based on a real life family member I had a falling out with a few years ago. I wanted it to be about a relationship between brothers because “Sean” and I had come up like brothers, and I was hoping it would be a sort of release for my conflicting feelings towards him – the love I still have in spite of feeling betrayed. That’s why it’s written in second person, like the narrator is speaking to his brother, but it quickly evolved into a thing of its own. The characters sort of took over and I just let them. I think I got over what I had initially wanted to do with it and it became this story of class struggle, I guess. I think that’s what it is, at least. I never know much about my own work.

David: I was blown away by your first book, “Heathenish”, so much so I added it to my best of 2017 list. I was re-reading my review of your book and, as much as I loved it, I found it “fucking soul crushing.” “Heathenish” tells the story of a young man’s fight with drug use, of trying to be a father, and getting his life back. You’ve talked about how this is a fictionalized memoir. I’m not concerned with how much is true or not, but how did you go about divorcing yourself from the subject matter which was you? What kind of difficulty did this present in the writing? 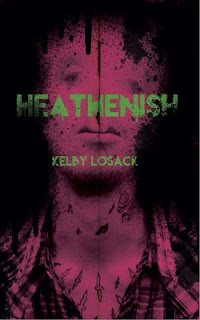 Kelby: I think it’s easier to write about personal experiences with a sense of detachment than it is to write with that same level of distance, but from perspectives of characters I’ve made up. Like, I know who I am, but it takes a lot of emotional investment to get in the head of a fictional person. So, I don’t know. There’s a coldness to "Heathenish" that I think just comes from capturing the emotions of that time in my life that I was writing about. At that time, I was doing a lot of things that altered my levels of consciousness, on top of just being depressed, so I often felt empty and cold. It came naturally, writing it with that distance from myself, because I’ve always sort of kept myself at a distance. Until recently, at least. Now I’m out here trying to open my third eye and communicate with the universe and shit. The detached narration, though, looking at it from a literary rather than a personal standpoint, could have also been a matter of not wanting to come across as sentimental, because I can’t stand that corny shit.

David: While I was reading “The Way We Came In”, I asked myself if the characters where white or black. After a few paragraphs, I realized that wasn’t important as you are telling a more universal story ­as both of your books focus on the lives of the working poor and the working class. In my review I wrote that the protagonist wasn’t living paycheck to paycheck, he was living day to day. In the States we live in isolated pockets of the same people and we’ve gotten really good at putting our blinders on to others who are different than us. I know there’s a question in here somewhere. I guess I’m not asking you to solve all the problems of the world, but could you talk about the class divide in the States and are you trying to give a voice to those who are really struggling?

Kelby: Working and lower class people are frequently misrepresented across all forms of media. It sucks, but that misrepresentation is prominent in crime fiction, too. If I have any kind of agenda with my writing, it’s definitely to bring an authentic voice to the scene, and not from a place of fantasy escapism or ignorant sympathy, which are both equally disgusting approaches to writing about poor people and street hustlers. I come by this shit honestly. I’ve been poor. I’ve sold dope. I’m not going to tell the suburbanite white dudes what they can or can’t write about, but I am going to be a part of balancing out the playing field. It’s happening, man. There’s people who’ve come up from the gutter who are writing about these things out of personal experience. Gabino Iglesias immediately comes to mind. I think there’s going to be a major shift in the crime fiction scene within the next few years, hopefully not just among the authors, but the reader demographic, too. I’m writing for people I grew up with and people on the corner and people out there grinding to get that bread.

David: You write in vignettes, some a page or two long and others, several pages. How did you come about discovering vignettes? Why did you choose a vignette style rather than straight narrative prose?

Kelby: There’s several reasons I like using the vignette style. I have ADD, for one, and vignettes allow freedom to jump around in time and place. You don’t have to stay on track, which is something I have trouble doing, as I’m sure parts of this interview might be examples of, haha. Another thing I dig about the style, though, is just the aesthetic appeal. There’s something about a single small paragraph on an otherwise blank page. Also, I work a lot – usually sixty hours a week at a manual labor job – so I have to make the most of my writing time, and I’m not patient enough to keep coming back to the same chapter every time I pick up a work-in-progress. I want to finish a chapter every time I sit down to write. As for where I discovered vignettes, I’m not going to front and pretend I was reading some ambiguous avant garde author. Really, I think I picked it up from reading my peers, especially Rios de la Luz and Troy James Weaver. Both of those cats can say so much in one short paragraph.

David: Give me five books or authors to read, genre doesn’t matter.

Kelby: Bud Smith is probably my favorite short story writer at the moment. Dude’s got this style and voice that just feels so real, even when his stories get weird (and they do get weird, like, sewer wolves and sentient seashells weird). His collection "Double Bird" is gold.

I recently read "Tampa" by Alissa Nutting and loved it. It’s dirty and so, so wrong and, yeah, I just loved it.

Everyone should read Ottessa Moshfegh.

Poetry is going through its own sort of punk era, I think, or at least there seems to be a wave of poets breaking into the scene at the moment that are pretty punk rock, and what I mean by that is they’re genuine, honest – they show the ugly parts of their souls and don’t pander to anyone. "Cheap Yellow" by Shy Watson is a good example of what I’m talking about.

The homie J. David Osborne has cooked up some magic with "A Minor Storm". He’s rediscovered (reinvented?) his voice, I think, and it’s fast, ugly, hilarious, and human. “Ugly” and “human” are redundant, I guess, but whatever. This book’s got a mystic Juggalo, quotable dialogue, and a diarrhea scene that made me laugh out loud.
David Nemeth at 3:00 AM
Share